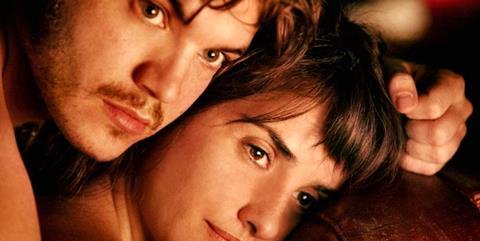 The overwrought romance Twice Born might appeal to audiences who prefer their love stories soapy, but even they may have to acknowledge that the film’s leads, Penelope Cruz and Emile Hirsch, are oddly lacking the fiery chemistry that’s necessary to sell this unabashedly ludicrous melodrama. Chronicling a couple torn apart by war and betrayal, director Sergio Castellitto’s adaptation of Margaret Mazzantini’s novel leaves no cliché unturned, yearning for big emotions that are consistently flattened by the lumbering storytelling.

From its earliest moments, Twice Born shows its hand as an old-fashioned romantic tearjerker in which litanies of buried secrets will come tumbling out at a steady clip.

Twice Born will benefit from Cruz’s marquee value, and the film’s sweeping, tragic romance could spark interest in discriminating date-night crowds. But the question remains whether a love story set during the siege of Sarajevo will prove too bleak for most viewers, who may decide to spend their entertainment dollars elsewhere.

In the present day, middle-aged Gemma (Cruz) and her teen son Pietro (Pietro Castellitto) travel from Italy to Sarajevo to visit her long-time friend Gojko (Adnan Haskovic). But the reunion proves bittersweet for Gemma, who flashes back to her relationship with an American photographer, Diego (Hirsch), whom she met in Sarajevo in 1984 and married soon after. As the flashbacks flesh out their time together, Gemma finally comes to terms with how their love affair ended.

From its earliest moments, Twice Born shows its hand as an old-fashioned romantic tearjerker in which litanies of buried secrets will come tumbling out at a steady clip. Subtlety isn’t exactly a valued commodity in this genre, but what is important is a sense that the film’s central lovers are consumed by their passion for one another.

Unfortunately, though Cruz and Hirsch have strong individual moments in Twice Born, their onscreen courtship never fully convinces. When they first meet, Gemma jokes about their age difference, and one can’t help but feel that Diego’s boyish impetuousness seems lightweight stacked up against Gemma’s sophisticated, sultry air. As a result, it’s hard to see precisely why she falls for him — his exuberant manner notwithstanding, he doesn’t have her intelligence or gravitas. The two actors have a decent rapport without ever feeling like lovers, even though they do share a few sex scenes.

Equally hard to reconcile are a few plot points later in the film that signal the lovers’ dissolution. Unable to have a child, Gemma and Diego eventually seek out an unusual solution that plays out in predictable, contrived ways, laying the groundwork for much heavy-handed sadness down the road for all concerned.

Additionally, the couple’s collision course with the wars in Yugoslavia ends up feeling more like a device to add a sufficiently dramatic backdrop to their love story than it is an organic complication in their relationship. Nonetheless, the couple’s problems conceiving and the bloodshed in Sarajevo prove vitally important to a series of twists, shocks, misunderstandings and reconciliations that conclude the film, none of which is particularly moving since Twice Born hasn’t earned the tragedy it tries to mine.