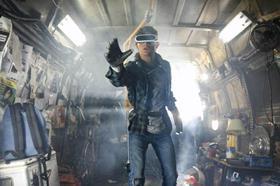 APRIL 2 UPDATE: Steven Spielberg’s Ready Player One made a strong start at the North American box office this weekend, easily taking the number one spot from a slumping Pacific Rim: Uprising.

Spielberg’s Warner Bros-distributed outing opened with a confirmed $41.8m from the three-day weekend and $53.7m since its Thursday opening. The take was in line with expectations for the sci-fi adventure with a reported budget of $150m-$175m.

Ready Player One opened internationally with $127.5m, giving the nostalgic, effects-heavy adaptation of a 2011 novel a global weekend total of $169.3m and a running total of $181.2m.

Last weekend’s top film, action sequel Pacific Rim: Uprising, distributed by Legendary Entertainment, dropped to number five on the chart with a confirmed $9.4m (for a domestic total of $45.8m), more than 66% down on its opening weekend take.

Disney and Marvel’s Black Panther continued its strong run, sliding by less than 33% to take a confirmed $11.5m, pushing the film’s domestic total to $650.9m.

Though Easter is not a national holiday in the US, the weekend’s religious significance seemed to work for I Can Only Imagine, with the Lionsgate/Roadside Attractions faith-based drama adding screens and dropping just 23% in its third weekend to take a confirmed $10.4m. With a domestic total of $55.3m, the film becomes the highest grossing release ever for Roadside Attractions, beating the $47.7m taken by Manchester By The Sea last year.

Just outside the top 10, another faith-based release, Pure Flix’s God’s Not Dead: A Light In The Darkness, opened with a confirmed $2.7m.

Box office for the top 12 generated $120.9m, up 5% on last weekend but down 26% on the comparable session in 2017 (which was not Easter weekend) when The Boss Baby made a strong chart-topping debut.