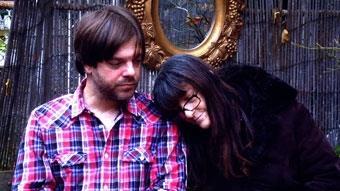 In this revised cut, Caouette has much improved upon the already impressive version shown in Cannes Critics Week 2011. After two months of editing after Cannes, he came up with a much more accessible, linearnarrative, with a significantamount of experimental apocalyptic abstractions excised to maintain the flow of the “real-time”story of a young man and hismother, a wise decision both aesthetically and commercially.

Caouette has an artful eye, and his wild abstract imagery is impressive.

The French production of this very American film, which IFC released June 27 on VOD as part of its “Sundance Selects” series - it opened the BAM Cinemafest in New York the same day - does have the potential to score nicely in art-house and off-the-beaten-track venues in other markets. The dynamic between Caouette and his mentally ill mother, 59-year-old Renee Leblanc, on whom the new cut focuses much more intensely, is poignant and universal; little translation necessary.

The one-of-a-kind filmmaker announces the underlying form in an opening text from Einstein: “The distinction between past, present, and future is only a stubbornly persistent illusion.” He pushes aside conventional notions of temporality for segments of the film nestled in between the punctuating chronological footage of their long road trip through the American South (much of it a treat for the viewer, with the duo driving a huge U-Haul truck between their hometown of Houston, where she has been given substandard treatment in a mental health facility, and Caouette’s residence in New York City, where she will move into an assisted-living facility in a nearby town so that he can closely monitor her treatment).

He structures his film according to what Russian theorist Pudovkin termed “cinematic time.” The sequences that take detours are not sequential: they offer the spectator a refreshingly creative push-and-pull sensation that shakes up what we see in the more ordered scenes. Caouette redefines “ellipsis.”

The end of the film (without giving anything away) obliquely summarises the tone and overlying theme of a personal documentary observing the affectionate relationship between the two. In the final bit of dialogue, each tells the other “I love you,” so simply it’s just, well, simply moving. The song over the final credits is Ted Lucas’s I’ll Find a Way—To Carry It All. The 39-year-old Caouette is an exemplary son, fiercely dedicated to Leblanc’s well-being, aside from his other multiple responsibilities (work, a teen-aged son, a lover, and, until his death a few years ago, his cranky, ultimately demented grandfather, Adolph Davis).

Leblanc was a beautiful, animated girl who, because of the bad advice doctors gave her parents, began at the age of 12 receiving electroshock treatments, which persisted for years. After that she moved in and out of institutions, and was prescribed a barrage of psychotropic medications, the most effective—and the one that damaged her brain after an overdose—being effective but precarious lithium.

In his astonishing first feature, the home-made, very experimental Tarnation (2004), we see evidence of Caouette’s freewheeling, unstructured childhood. He moved between his odd grandparents and foster homes (his father was never on the scene). He got a camera and filmed the insular world he knew, and, even moreso, himself. The two versions of Walk Away Renee, both made with the assistance of small teams, are in many ways Tarnation’s offspring, with some of the same scenes and references. (The three together could be called ‘The Accidental Trilogy’)

The three films track Caouette’s journey from extreme youthful narcissism to mature, nearly selfless adulthood. His acting style shifts, from exhibitionism in the early work to a played-down naturalism in Walk Away Renee (not surprisingly, he is a Sissy Spacek fan); in Renee 2 the approach serves to successfully foreground Leblanc more than in the earlier cut, the camera never shying away from her eccentricities, unpredictability, and drug-induced mood swings.

Caouette has an artful eye, and his wild abstract imagery is impressive, but he wisely decided that in Renee 2 her story should take the primary position. He toyed with the idea of filming Renee’s story backward but decided not to interfere with the thrust and clarity of the observational documentary. One of the major differences between Renee 1 and Renee 2 is the excision of a sub-plot about Cloudbusters, a fictional cult that believes that clouds store the healing energy about which Wilhelm Reich wrote. In an earlier, unfilmed version, the Leblanc narrative and the Cloudbusters fantasy would merge at the conclusion, in which she would be healed. Smart decision.

Being mostly about Leblanc, and often shot from her point-of-view, Renee 2 works even more effectively now than did the Cannes version. The title comes from the well-known Left Banke song from the ‘60s, Renee’s formative years, but, taking the revisions into account, “Come Hither, Renee” could work just as well.