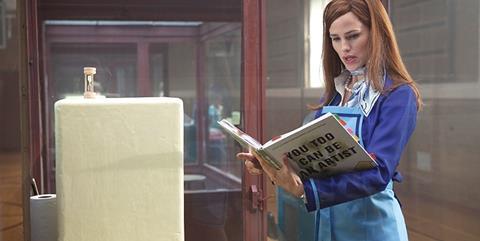 Its press notes compare it to Best In Show and Election, but Butter, which had its world premiere at Toronto, is a very soft comedy of Americana in comparison. Funny and inane in equal measure, it is essentially a vehicle for the not inconsiderable comic talents of Jennifer Garner as a scheming right wing monster along Michelle Bachmann lines. For that timely parody alone it might have its 15 minutes in the box office sun in the domestic market.

Garner is clearly having fun in the role and she does a great job of embodying the at-all-costs ambition and brazen hypocrisy that characterises Bachmann, Palin et al.

Prospects in international territories where Bachmann is not yet a household concept are less rosy, but it’s a sunny package with some nice names in smaller roles – Alicia Silverstone, Hugh Jackman – and will have a happy life down the line on TV and on-demand platforms.

The film opens as Garner’s character Laura Pickler steps onto the stage in Iowa as a gubernatorial candidate, then cuts back a year to a butter-sculpture contest. For the last 15 years, Laura’s husband Bob (Burrell) has won the state butter carving contest with his increasingly ambitious butter sculptures (The Last Supper etc) but, when he is pressured to retire and give other sculptors their shot at glory, Laura goes berserk and decides to enter herself in the race.

Meanwhile 10 year-old African American orphan Destiny (Shahidi) has discovered that she too is a gifted butter sculptor and she enters the contest against Laura, with the support of her foster parents (Corddry, Silverstone). As does a local stripper (Wilde) who, having failed to bed Bob, has it in for his odious wife. Jackman has a cameo as her an ex of Laura’s whom she uses to sabotage Destiny.

Director Jim Field Smith (She’s Out Of My League) keeps a brisk, perky tone to the piece that keeps it engaging even as the story goes off the rails. While the butter contest works okay as a metaphor for the dichotomy in US politics these days, the normal (ie left wing liberal) characters and the poor little black orphan are just too good to be true.

Laura’s rise to political power is just touched upon, suggesting a far more intriguing prospect than her cheap ascent to the top of the butter mountain. Garner is clearly having fun in the role and she does a great job of embodying the at-all-costs ambition and brazen hypocrisy that characterises Bachmann, Palin et al.

US dist/International sales: The Weinstein Company