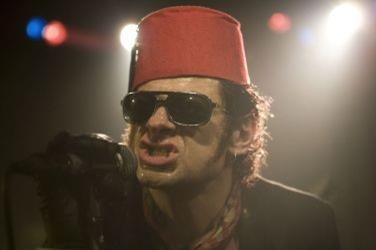 A strong central performance from Andy Serkis as the late British punk rocker Ian Dury powers Mat Whitecross’ directorial debut through a fractured 113 minutes. sex&drugs&rock&roll often seems distracted by its mercurial subject and the result is a servicable if unexciting Britpop biopic.

A narrative approach reminiscent of last year’s Bronson features Dury as a greasepainted music hall MC giving a vaudeville-style flashback to his life and times. This distancing device tends to dissipate some of thefilm’s energy, although warm notices for Serkis’s compelling performance should propel sex&drugs&rock&roll to decent figures in the UK with middle-aged fans of the rocker’s work, which peaked in popularity the late 70s and early 80s. International markets could be a tougher sell for Metropolis International Sales, where ancillary may make up the shortfall.

Dury’s disability – he contracted polio at the age of seven - and hard-knock education in a school for disabled children compete here with his teetering alcoholism, inability to sustain relationships, burgeoning career as a radical singer-songwriter, irresponsibility as a father and the angry politicisation over disability issues

Underwater footage (Dury believed he contracted the disease from a swimming pool) and clips from Spartacus abound in Whitecross’ Stoned-like melange.

A clever and troubled artist, Dury was an elder statesman of the punk movement, having first graduated from the Royal College of Art (no reference is made to this here; in fact, chunks of Dury’s life are cast aside). His disability resulted in a highly-distinctive stage presence, his rapid-fire lyrics spat out as he hunched over his microphone, this stance and energy perfectly captured here by Serkis.

Whitecross follows an enticing, Yellow  Submarine-style opening credits sequence and a rousing rendition of Billericay Dickie with Dury on stage, guiding the viewer through his past – a fractured, tricked-up approach which can work to punch out the narrative thrust. Dury is shown initially at the birth of his son, Baxter (another warm performance from Son of Rambow’s Bill Milner), and his relationship with the boy forms some of the picture’s narrative thread, although Baxter has a habit of disappearing when the screenplay jitters off to another strand of Dury’s life.

Following more, curiously unmoving flashbacks to Dury’s tough childhood and abandonment, the film tracks the dissolution of his first band and the formation of The Blockheads. His relationship with Baxter’s mother (Williams) is over, and Baxter has come to live with Dury and his current girlfriend Denise (Harris). Much time is spent on Denise’s problems with Dury, but theirs is not a compelling relationship by any stretch of the imagination and Harris cannot overcome the challenges of acting beside Serkis’ busy characterisation.

The film then veers off again into Serkis’ alcohol problems before he resurfaces in his old school, talking to disabled children and working on the angry lament Spasticus Autusticus.

As to be expected, the film is awash with cameos, from Ray Winstone as Dury’s father to Mackenzie Crook to Noel Clarke and Toby Jones as a nasty borstal orderly.

The film picks up enormously whenever “live” performance is depicted, accurately conveying the raw excitement and sheer anarchy of the times. The songs are performed by the Blockheads with Andy Serkis with a vigor which prompts a wave of nostalgia for the raw days prior to prefab pop.