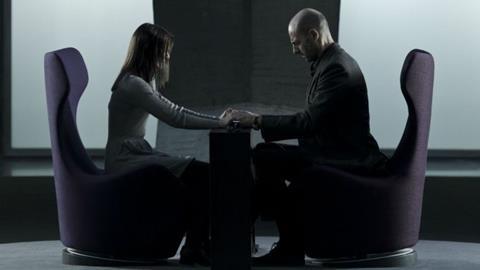 A nicely tense and claustrophobic (if rather familiar at times) psychological thriller, director Jorge Dorado’s Anna offers nicely complex roles for the ever-reliable Mark Strong and Taissa Farmiga (younger, and equally poised, sister of Vera). The film gets a limited release in the US and while likely to have a larger audience on home entertainment it is a classily made film with a strong cast and some thoughtfully constructed thrills.

Metaphors and allusions abound, but the film heads off towards a smart finish that at least makes the audience question all of what they have seen.

Strong plays psychiatrist – or ‘memory detective’ – John Washington, assigned the job of delving into the subconscious of troubled rich girl Anna (Farmiga) who has been accused of murdering three girls at her boarding school. She is now on a hunger strike and he must try and unravel her repressed memory and try to find out what happened.

It is all pretty familiar territory for Strong, who has the fierce intelligence and charm to play such characters (as well as tortured heroes and dastardly villains). In fact he treads vaguely similar territory in Rowan Joffe’s upcoming psychological thriller Before I Go To Sleep, as a doctor who tries to unlock the memories in Nicole Kidman’s equally troubled brain.

Washington has been assigned the job by Mindspace, an operation run by a psychiatrist (Brian Cox, all genial smiles but hidden machinations) and on the surface it all seems quite straightforward – tackle those pesky hidden traumas that are haunting Anna. Some smart special effects aid that journey into Anna’s brain, though Washington has his own issues (a recent loss and a subsequent mild stroke) but that doesn’t stop him bonding with the troubled Anna.

Her mind – as well as the mansion and woods beyond – offer twists, turns and blind alleys which sees the pair trying to unearth the truth while other parties are intent on twisting things their own way. Metaphors and allusions abound, but the film heads off towards a smart finish that at least makes the audience question all of what they have seen. An intriguing and well made film that while satisfying never really totally grips, despite the best efforts of Mark Strong and Taissa Farmiga.