Alejandro Gonzalez Inarritu on the challenges of 'The Revenant'

For Alejandro Gonzalez Inarritu, making The Revenant was comparable to Ernest Shackleton’s heroic exploration of the Antarctic. He tells Jeremy Kay about the challenges and rewards of endurance film-making 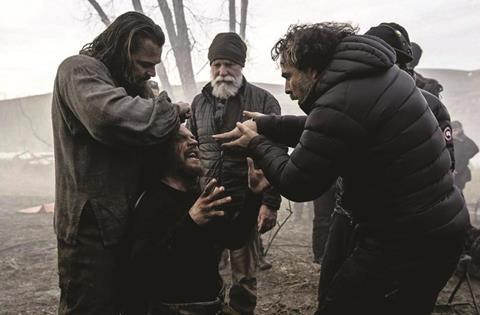 Both the storyline of Alejandro Gonzalez Inarritu’s The Revenant and the story of its production are imbued with a ferocious will to live. The weather wreaked havoc on schedules, elusive daylight frayed nerves, crew members quit, the budget swelled and the seemingly impossible demands of shooting in camera kept on coming.

But throughout a testing 11 months of filming, the Mexican-born Inarritu, a famously intense storyteller whose vision on this film demanded Herzogian levels of ambition, ensured the band played on.

His odyssey began five years ago. “[Anony-mous Content head and producer] Steve Golin, my friend, worked with [screenwriter] Mark L Smith, and Mark had this script,” he recalls. “It was very loosely based on the novel [of the same name by Michael Punke]. The only thing they have in common is the title and the fact [Hugh] Glass is attacked by a bear and he is abandoned and he survives.”

Not much else was known of this real-life 19th-century frontiersman but Inarritu was intrigued. “I was attracted to the spine of it because, as a film-maker, I’ve always wanted to do a film in landscapes. Directors I admire have done that but I’ve never explored it.

“I recognised this had a very simplistic, pure plotline, very basic, very primitive, very Biblical. It allowed me to play with a lot of silences, contemplations and visual images.”

Life - and Birdman, for which Inarritu picked up armfuls of prizes, including the best director Oscar - got in the way and pre-production on the film, backed principally by New Regency with investment from RatPac Entertainment, did not begin until May 2014.

Inarritu and his cast spent a month rehearsing The Revenant’s visceral opening sequence, which sees Glass and his group under attack at the edge of a river by Native Americans hell-bent on stealing their valuable pelts. They are seen from multiple points of view as two-time Oscar-winning cinematographer Emmanuel Lubezki snakes his camera through the scene.

“Five years ago I knew I wanted to shoot a scene like that,” says Inarritu, who storyboarded every beat. “Most importantly for me was not only to make this scene a real experience but to submerge people in the emotional experience and ask whose point of view was this?

Lubezki shoots natural light, which placed time limitations on the set-ups. There were actors, extras, horses, weapons, screaming, blood, a river, a boat… “It was very scary, very difficult, very challenging,” admits Inarritu. “I remember when we finished we almost cried tears of happiness.”

His idea was to create a “wild ride” that sets in motion the events of the narrative. Lubezki’s roving camera captures the majesty and indiscriminate fury of nature and does not let up throughout the film.

When Inarritu contemplated The Revenant, he knew well the abilities of the cinematographer known as Chivo. The director was confident Lubezki’s “craft, his genius” would capture the splendour of the great outdoors. “Both of us always talk about poetry as an element [of film-making],” Inarritu says. “If a shot does not reveal the mysterious nature of something, we’re not worthy to make that shot. We always talk about making something beautiful.”

After surviving this initial attack, the trappers are heading for the safety of their fort when Glass is mauled almost to death by a bear in a scene of breathtaking ferocity and realism. Inarritu prefers not to reveal how it was done ― although reportedly a motion-capture technique was used in an otherwise effects-free film.

As Glass, DiCaprio’s technical ability, his soulful connection with the character and his readiness to endure great physical hardship impressed Inarritu. “I understand the commitment he has to the environment and we shared a lot of those thoughts and themes that were below the surface of the film,” says the director. “They navigate [us] through the social context, the genocide of animals, the genocide of the Native Americans, the capitalism that started [it all]. We’re suffering still the consequences of that vision of the world.”

DiCaprio, who brawls, drags himself through snow, sloshes through freezing water and eviscerates the carcass of his horse to bed down for the night as he hauls himself across treacherous terrain to avenge the death of his son, has said The Revenant is the hardest thing he has ever done.

In a shot that evokes a spiritual kinship to Werner Herzog’s Fitzcarraldo, the production had to transport horses and a crane 8,000ft up Fortress Mountain in Alberta. Planes dropped explosives to create an avalanche the film-makers had to capture in camera in a single take.

“It was incredibly nerve-wracking and very exciting at the same time,” says the director. “Everything was very complicated, everything. Some days we were 40 degrees below zero at a time when we didn’t need it, so suddenly the whole location we said we’d be shooting in for 10 days was destroyed.”

With one month still to go in Canada the weather warmed up and the production lost its snow, forcing a mad scramble to snowy locales at the tip of Argentina in early 2015. Shooting wrapped in August and, by the end, the budget had reportedly ballooned from $60m to $135m.

Others have gone further in their accounts of hardship and it is now well documented that crew members walked out or were fired. One union rep complained publicly about safety issues, but Inarritu denies these claims. “The facts speak for themselves. There were no injuries in all the film, at all,” he says. “No actor, nobody got injured. That speaks for itself about how safe we were considering we shot 11 months around the world in those conditions and nobody got hurt.

“When [Ernest] Shackleton went to the end of the world he would recruit people and he would never lie about it. He said, ‘It will be cold and probably we will not return.’ Everybody who was hired [for The Revenant] knew it would be an extremely challenging shoot and the standards I set were very high. The first guy that did those things was myself.

“But it was an exciting challenge and I have never felt anything like that. We finished. We climbed the mountain. There was a lot of camaraderie and happiness.”

Inarritu worked on The Revenant until November and says finishing it gave him the feeling of landing after a long and turbulent flight. The entire process has meant a lot to him.

“The metaphor [of the story] was that this character died and was born again many times. First he dies physically from the bear attack and he dies spiritually with the death of his son. Then he is healed spiritually by these Pawnee Indians and then the horse he sleeps inside heals his body and he returns a couple of times and he’s not afraid; he’s already been there and now he’s ready to get what he needs.

“I had a couple of friends dealing with cancer and a friend who lost a very close family member and feel this is very similar. We’re exposed to a lot of [metaphorical] bear attacks. We lose our jobs and go bankrupt or we have a disease. The film is about that, about resilience, about endurance.”