This year’s BAFTA nomination list is studded with former Screen International Stars of Tomorrow – in particular the acting sections, with two Best Actor contenders in Benedict Cumberbatch and Eddie Redmayne. 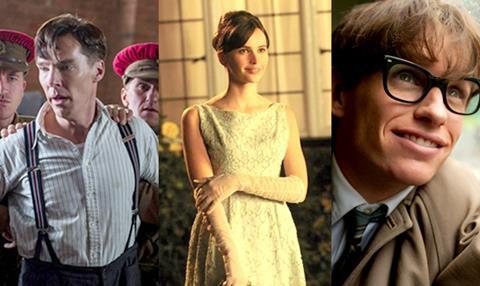 This is highly likely to be repeated at the Oscars, with Selma’s David Olewayo (a Star of Tomorrow in 2005, alongside Redmayne; Cumberbatch featured in 2004) making the Best Actor category at the Academy Awards a potentially Stars-of-Tomorrow-dominated section.

Felicity Jones, BAFTA-nominated for her role in The Theory of Everything, was talent spotted by Screen International in 2007. She is also tipped to feature on the Oscar nominations list.

Moving into its 12th year in 2015, Screen’s Stars of Tomorrow issue, which traditionally is published in June, is the definitive talent-spotting feature in the UK, known internationally as an unparalleled identifier of young talent.

This year’s EE BAFTA Rising Star nominees Gugu Mbatha-Raw and Jack O’Connell featured in Screen International as far back as 2008, for instance, when they appeared alongside Tom Hiddlestone and Aaron Taylor Johnson.

Stars of Tomorrow also spots behind-the-camera talent – highlighting directors and writers before their first feature credit has been distributed.

Hong Khaou, BAFTA-nominated as a breakthrough talent for Lilting, featured in 2013. And two talents behind the short films nominated for a BAFTA were featured in 2014’s Stars of Tomorrow – producer Michael Berliner (Emotional Fusebox) and Dawn King, writer of The Karman Line.

To feature in Stars of Tomorrow, candidates must be under the age of 30; this year the field was widened to include UK and Republic of Ireland Irish nationals.

In 2014, the talent line-up was celebrated by the London International Film Festival, in conjunction with the British Council and the Casting Society of America.