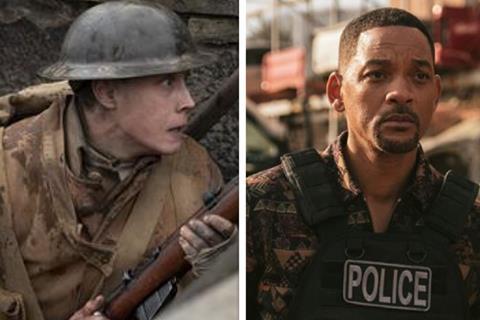 1917 and Bad Boys For Life both crossed $200m at the worldwide box office over the weekend, while Greta Gerwig’s Little Women is fast approaching the $150m mark.

Bad Boys For Life ruled the international weekend and surged past the $200m worldwide box office mark to reach $215m. The action sequel starring Will Smith and Martin Lawrence grossed $42m internationally as the running total climbed to $95m.

Jumanji: The Next Level stands at $738m worldwide and added $9.6m internationally for $454m, fired up by a $2.3m second weekend hold in Brazil that raised the tally there to $8.7m.

Greta Gerwig’s Little Women is approaching the $150m global box office mark and stands at $147m, of which $53m comes from the international arena following a $5.6m session. The period drama opened in Mexico on $730,000, and has amassed $24.1m in the UK. Horror remake The Grudge grossed $2.5m for. $19.5m international running total.

In the weekend when 1917 cemented its status as an Oscar favourite, the First World War drama grossed $23.7m through Universal Pictures International and Amblin Partners territories for a $96.6m running total and combined with a $15.8m hold in North America, where the film has crossed $100m, to reach an estimated $200.5m at the global box office.

On Saturday Sam Mendes was named best director by the Directors Guild of America, propelling him to the top of the pile in the run-up to the Oscars on February 9. The film is produced by Amblin Partners, DreamWorks, Neal Street Productions and New Republic Pictures.

Frozen II added $7m for $949.5m internationally and $1.4193bn globally, overtaking Avengers: Age Of Ultron on $1.404bn to rank as the tenth highest global release of all time.

Whodunnit Knives Out grossed $2.2m from 62 markets for $134.9m internationally and $286.8m worldwide. China is top on $28.2m after eight sessions, followed by the UK on $16.5m after nine. Knives Out will finish its international rollout in Japan on January 31.

Miscarriage of justice drama Just Mercy brought in $1.5m from 20 markets as the international running total reached $3.4m and worldwide climbed to $30.5m. The film starring Jamie Foxx, Michael B. Jordan and Brie Larson debuted in Australia on $531,000, and added $338,000 in the UK to reach $1.4m after two sessions.