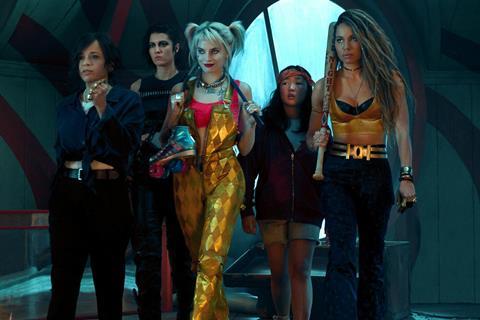 FEBRUARY 10 UPDATE: Boding well for a year that will see five comic-book tentpoles directed by women, Margot Robbie action vehicle Birds Of Prey directed by Cathy Yan dominated the global box office in its maiden session, earning a confirmed $79.5m including a $33m number one launch in North America.

UPDATED: The Suicide Squad spin-off featuring Robbie as Harley Quinn earned $46.5m from 78 markets and performed strongly in traditionally robust DC markets in Latin America, the UK, and Russia. Mexico led a raft of number one debuts on $4.4m, followed by Russia on $3.9m, the UK $3.7m in a number two debut behind the launch of Dolittle, and Brazil on $2.8m in first place.

In further table-topping launches, Birds Of Prey earned $2.6m in France and Australia and $2.4m in Indonesia, which delivered a strong result despite coronavirus fears impacting overall cinema-going across swathes of southeast Asia.

UPDATED: Dolittle grossed $19.1m for a $96.9m international running total and has reached $160.8m worldwide. The Robert Downey Jr. family adventure defied poor reviews to open at number one in the UK on $6.6m including $2.5m in previews. It opened in France at number two on $2.5m.

Sweden has delivered $1.4m through Nordisk after two, Poland $1.3m through Monolith after three, and India $1.4m through Reliance after four.

UPDATED: On the back of its six Oscar nominations, Searchlight Pictures’ Jojo Rabbit has now reached $74m globally. The Second World War friendship drama earned $4.5m internationally for $44.4m, and climbed to $74.5m worldwide. It opened in Brazil on $400,000 including previews, and arrived in South Korea on $300,000.

The Gentlemen earned $3.8m as the international haul climbed to $33.5m, powered by a $1.3m debit in France. The UK added $454,000 for $14.5m after six sessions, and Australia and New Zealand have generated $10.2m after six. Guy Ritchie’s crime film opened in Russia and Mexico this week.

Knives Out has reached $299.6m globally after 11 weekends of release, while the international tally has reached $140.7m with China the lead market on $28.4m.