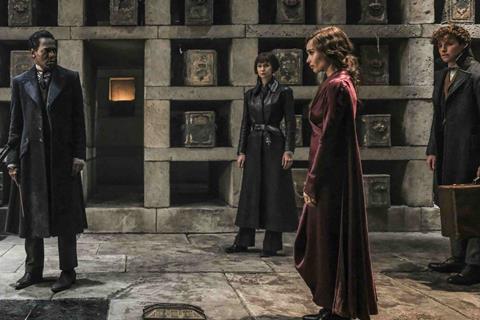 NOVEMBER 26 UPDATE: Fantastic Beasts: The Crimes Of Grindelwald remains the global box office champion for the second consecutive weekend as the fantasy soared past $400m worldwide and $300m internationally.

UPDATED: Fantastic Beasts: The Crimes Of Grindelwald added a muscular $83.3m from 80 markets to reach $322.2m internationally and rank number one in 32 holdover markets. The global haul stands at $439.2m.

Japan delivered a $13m (¥1.5bn) debut on 1,008 screens to open on par with 2016’s Fantastic Beasts And Where To Find Them, which opened over five days, and score Warner Bros’ biggest debut of the year-to-date.

Overall the film is tracking roughly on par with the original in the same markets at the same stage of release, and is roughly 3% ahead in the EMEA region where it is the top film, and on par with Latin America, where it ranks second.

UPDATED: Ralph Breaks The Internet debuted in 18 territories on $42.3m and combined with the North American Thanksgiving holiday launch for $97.2m worldwide, rising to $126m including five days in North America. The animation sequel was big in China, where it debuted on $19.5m to score the third biggest Disney Animation / Pixar debut and has already outstripped the final gross of Wreck-It Ralph.

UPDATED: Bohemian Rhapsody crossed $300m as $38.2m from 75 markets pushed the international running total for the Queen and Freddie Mercury drama to $320.3m. The film remains in good voice in its key markets. South Korea climbed 80% over opening weekend to add $8.6m for $36.2m after four, while Japanese audiences rewarded the film with a $3.5m hold for $20.7m after three. France produced $2.9m for $23.4m after four, while the UK generated $2.9m for $50.7m after five.

Emperor Motion Pictures’ A Cool Fish, a caper with social commentary, added $25.1m to send the international running total to $49.7m. Rao Xiaozhi directed. A Fool actor Chen Jianbin is the lead as former police officer who now works as a security guard who must find the people who kidnapped his paralysed sister.

The Girl In The Spider’s Web presented by presented by Columbia Pictures / MGM / New Regency added $2.6m from 51 for $16.8m.

UPDATED: Rowan Atkinson action comedy vehicle Johnny English Strikes Again has become the biggest hit internationally in the franchise after $12.4m from 27 active territories boosted the running total to $138.6m from 68 overall. An $11.4m debut in China delivered the territory highlight and ranked fourth. Germany has delivered $8.3m after six sessions, and the worldwide haul stands at $142.9m.

UPDATED: Robin Hood starring Taron Egerton and Jamie Foxx earned $8.9m from 32 markets at the weekend as the action adventure launched day-and-date with North America. The UK led the way on $1.7 including previews to rank fourth, followed by the $1.4m number one debut in the Middle East.

Italy and Australia generated $961,000 at number two and $933,000 at number three, respectively. Most of the remaining major markets launch this week.