DECEMBER 28 UPDATE: A further confirmed $149.2m boosted Disney-Lucasfilms’ Star Wars: The Force Awakens past the half-billion mark in a huge Christmas weekend session and destroyed the second-weekend record of $106.6m set by Jurassic World back in the summer. 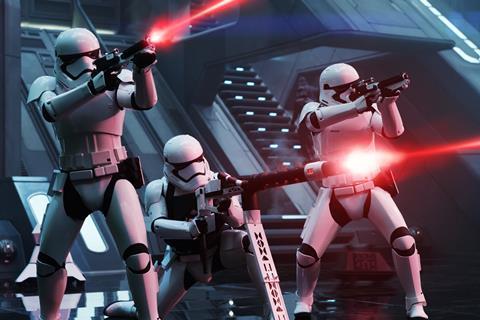 Perched menacingly on $540.1m by Sunday, the space opera added several new speed marks to its perfect record, crossing $400m in eight days, $450m in nine and $500m in ten.

The Force Awakens’ Imax haul is on course to cross $70m inside 11 days in what will become another industry benchmark, overturning the 30-day record established by Avatar.

Meanwhile Paramount launched the Will Ferrell-Mark Wahlberg comedy Daddy’s Home at number two on a respectable $38.7m from 3,271 theatres, while David O Russell’s Jennifer Lawrence starrer Joy arrived in third place via Fox on $17m from 2,896.

The Will Smith drama Concussion opened at number seven on $10.7m through Sony on 2,841. The film reportedly cost $35m to produce and a modest result feels less adequate given the presence of Smith, although his box office powers have waned over the years.

The film will need good world-of-mouth to prosper although it is enjoying a strong run in Asia via Lionsgate International licensees and has amassed more than $38m in China.

The film is on a one-week nationwide 70mm roadshow and will expand digitally on December 31 and continue to play on 70mm in select venues.

New Line-MGM’s Creed at number 11 has grossed $96.1m through Warner Bros after five weekends and will cross $100m within days.

Box office for the top 12 amounted to $281.2m and fell 8% against last weekend and climbed 33.3% against the same session in 2014 when The Hobbit 3 ruled for the second weekend.

The Hateful Eight expands wide this week and there are no new releases.