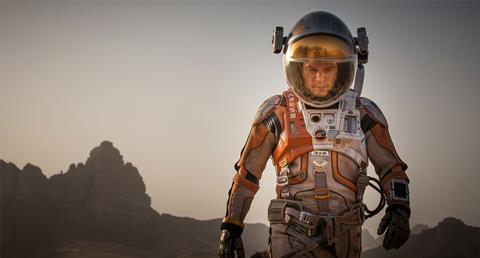 The UK, Australia, Mexico, Brazil, Argentina, Taiwan and Hong Kong are expected to deliver the biggest hits for The Martian.

Sicario arrives in Germany this weekend and by Monday had grossed more than $4.9m overall through Lionsgate International.

Pixar’s Inside Out stands at $424.6m through Walt Disney Studios Motion Pictures International and ventures into Germany.

Marvel Studios’ Ant-Man on $229.7m has no new openings this weekend.

Baltasar Kormakur’s adventure film Everest stands at $86.1m via Universal Pictures International and is expected to surge past the $100m base camp this weekend.

Sony Pictures Releasing International’s Hotel Transylvania 2 has grossed $38.5m and sinks its teeth into a further nine markets this weekend, among them Hong Kong and South Africa.

The tightrope artist drama premiered at the New York Film Festival this week and arrives in mostly Eastern European and Middle Eastern territories including the UK and Poland.

The Intern stands at $19.5m via Warner Bros Pictures International and opens in the UK, Australia and Mexico this weekend.