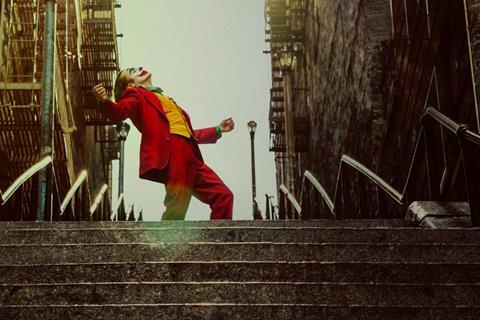 OCTOBER 14 UPDATE: The momentum rests with Joker as the Warner Bros tentpole demolished the competition in its second weekend, holding on to its global, international and North American box office crowns with ease as an estimated $178.7m propelled it past the half-billion global mark.

UPDATED: Joker remains on devastating form at the international box office and grossed $125.3m from 79 markets following a 29% drop to push the running total to a confirmed $354.7m after 12 days, and the global tally to $548.3m.

Ang Lee’s action thriller Gemini Man starring Will Smith and Will Smith grossed $31.1m from 58 markets, of which 53 were new. The firs wide international session means the film stands at an early $39m from 85% of the international footprint, and $51.6m worldwide including the $20.5m number three North American debut.

Family adventure Dora And The Lost City Of Gold stands at $53m and opens in its final market Brazil on November 14.

UPDATED: Once Upon A Time… In Hollywood has reached $224.2m internationally and $364m worldwide with China to come on October 25. The Angry Birds Movie 2 grossed $2.9m from 45 markets for $94.4m and opens in France this week.

Jennifer Lopez and Constance Wu in the drama Hustlers coaxed a further $3.9m from international markets to reach $23.6m, and the film has earned $121.6m at the worldwide box office. It opened in second place in Australia on $2.2m, and stands at $8.5m in the UK.