'Jumanji: Welcome To The Jungle' storms China on $39.9m (update) 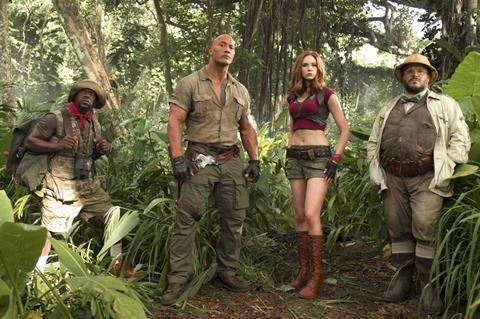 JANUARY 16 UPDATE: A confirmed $39.9m debut in China helped Jumanji: Welcome To The Jungle retain its international box office crown with ease as $81.7m propelled the running total to $385m and $676.6m worldwide.

Elsewhere, Star Wars: The Last Jedi has overtaken Beauty And The Beast to become the tenth highest global release of all time and the top 2017 global release as approximately $30.3m boosted the running total to $1.271bn as of January 16 compared to Beauty’s $1.264bn. Working Title’s Darkest Hour rules the waves in the UK with a thunderous $6.4m debut including previews.

UPDATED: Jumanji’s $39.9m China bow has amassed more than The Last Jedi has grossed in the same territory in its first week, and elevated the Asian score to approximately $113.1m, assisted by an impressive $2.3m debut in the Philippines, and a $2.9m second-weekend hold in South Korea that boosted the tally there to $11.6m.

Latin America’s regional tally has climbed to approximately $57m as the film opened top in Peru on $1.2m, and held on to number one in its second weekend in Brazil as a superb 29% drop on $3.6m boosted the haul to $13.6m. Jumanji also stayed top in its third consecutive session in Colombia on $1.1m for $6.2m, and added $1.4m in Argentina where it ranks number two and stands at $4.1m after two sessions.

Ridley Scott’s All The Money In The World starring Michelle Williams, Christopher Plummer and Mark Wahlberg grossed $741,000 in the UK in its second weekend for $3.3m, and has earned a supporting actor Bafta nod for Plummer.

UPDATED: Star Wars: The Last Jedi climbed by approximately $19m to $675m internationally, while North America has generated $595.6m. In Europe, The Last Jedi ranks as the eighth highest grossing release of all time, passing The Hobbit: An Unexpected Journey and held on to number one in Germany and Switzerland for the fifth consecutive weekend. Germany has generated $77.7m, behind the lead market of the UK on $107.4m

The sci-fi has also ranked top in Japan for five consecutive weekends. It stands at $58.3m and ranks fourth on the chart behind the UK, Germany, and France on $60.2m. China has been a disappointment and the film has grossed $39.1m after its first week of release.

This is a film that has unlocked China and the $183.1m running total consolidates Pixar’s record achievement in that territory. Next is Mexico on $57.8m – Coco is the number one release of all time there – followed by France on $29.9m, Spain on $18.1m, and Italy on $11.9m.

Three Billboards Outside Ebbing, Missouri, powered by last weekend’s Golden Globe wins and Bafta nods that confirms it as an awards season frontrunner, grossed $7.6m from 12 markets for $9.9m. The drama opened in the UK on $3.1m, Spain on $1.1m, and Italy on $1m.

The Shape Of Water debuted top in its first international market of director Guillermo del Toro’s native Mexico on $3.4m from 1,342 screens. Murder On The Orient Express stands at $241.8m, and Kingsman: The Golden Circle $305.1m following a $1.7m Japan weekend that elevated the tally after two weekends to $8.9m and more than the lifetime total of the predecessor.

Pitch Perfect 3 grossed $8.1m for $68.3m and delivered a mighty $2.1m in the Philippines for number two. It stands at $18.9m after four weekends in the UK, $12.6m after two in Australia, and $8.9m after four in Germany. Local acquisition Benedetta Follia arrived at number one in Italy on $4.6m, while Spanish hit Perfectos Descondidos added $1m in its seventh session in Spain to return to top spot and reach $19.7m.

UPDATE: Liam Neeson thriller The Commuter brought in $9.7m from international markets, of which $2.3m came from Germany and Austria via Studiocanal. The $7.4m balance came from assorted distributors: Italia Film markets generated $2m from the Middle East; Apex reported a $613,00 number two bow in Taiwan; and there was a $500,000 launch in Colombia via Gussi.

All The Money In The World opened in three territories this weekend (the Netherlands, Finland and Vietnam) as a $2.9m haul including the UK, where Sony distributes the film, brought the running total to $12.7m. There are 20 territories to go including Brazil and Argentina this week.

The company did not report number for The Disaster Artist, whose embattled director and Golden Globe-winning star James Franco last week labelled as “not accurate” allegations of misconduct and has since been accused of inappropriate behaviour and misconduct by five women. The film stood at $5m heading into the weekend.