Universal and Illumination’s Minions has reached $159m and will vie for international supremacy this weekend with Paramount and Skydance Productions’ sci-fi reboot. 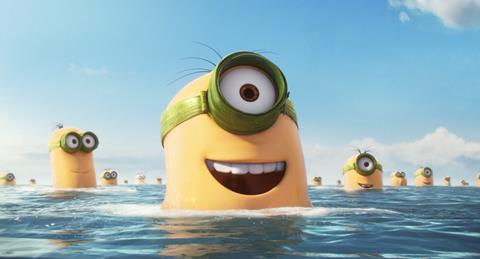 Universal Pictures International is riding high with its Despicable Me spin-off. Minions stands at $159m and arrives in a further 25 territories day-and-date with North America.

Highlights are expected to include Mexico, Russia, France, Hong Kong and India.

Jurassic World has amassed $851m and still has plenty to offer with $900m firmly within its sights in the next week or so. Ted 2 stood at $36m by last Sunday and arrives in the UK.

Meanwhile Terminator Genisys has raced to $107.6m and ventures into Germany, Japan, Italy and Spain via Paramount Pictures International with China still to come.

Disney / Pixar’s Inside Out has reached an early $131.7m and ventures into South Korea via Walt Disney Studios Motion Pictures International. Avengers: Age Of Ultron has amassed $929m.

Entourage has grossed $13.7m and opens in Germany, while Magic Mike XXL on $10.4m opens in Australia and Spain. The Gallows arrives in a handful of smaller European and Asian markets this weekend.