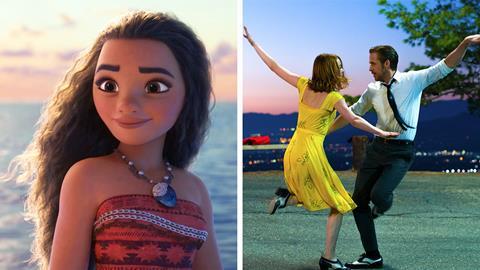 Fantastic Beasts And Where To Find Them ranks third on $198.9m after three sessions, while Doctor Strange in fifth stands at $222.3m after six.

Arrival, distributed via Paramount in North America, slipped to fourth place after a mere 23.1% drop, adding $5.6m in the fifth weekend for a tremendous $81.4m running total.

Two other awards contenders broke into the top ten. Nocturnal Animals surged nine places to seventh as Focus Features expanded the drama-thriller from 127 to 1,262 theatres in the fourth session, boosting box office by $3.2m for a $6.2m running total.

Roadside Attractions expanded Manchester By The Sea in its fourth session from 156 to 366 as the drama added $3.1m for $8.3m and climbed three places to eighth.

The top 12 combined for $74.7m overall, down 14.7% on last weekend and up 7% on the comparable session in 2015, when The Hunger Games: Mockingjay – Part 2 reigned supreme for the fourth weekend.