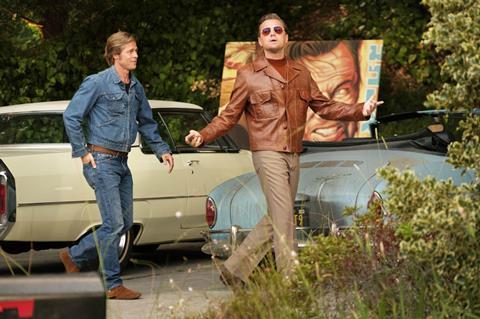 ‘Once Upon A Time…In Hollywood’

AUGUST 19 UPDATE: Columbia Pictures’ Once Upon A Time…In Hollywood took pole position at the international box office this weekend, opening in 46 markets and grossing an estimated $53.7m from 11,200-plus screens.

According to studio sources, it was the best start in that group of territories for any of Quentin Tarantino’s films, surpassing the writer-director’s Django Unchained by 30% for the same group of markets at current exchange rates.

In the UK, Once Upon A Time premiered with a five-day total of $8.9m, beating the opening of Django by 76%. In France the film launched with $6.9m, on a par with Django. Germany delivered an opening weekend of $5.6m (including previews) and Australia produced $4.4m, 68% bigger than Django. Spain delivered $3.6m over four days. The film opens next weekend in Mexico.

Spider-Man: Far From Home took in $3.1m from 3,000-plus screens in 64 markets this weekend, bringing its international total to $733m and making it Sony’s highest grossing film of all time.

The Angry Birds Movie 2, from Sony Pictures Animation, took $19.4m from 26,400 screens in 29 markets, bringing its international total to $30.2m. China led all markets with $10m, on par with the opening of The Secret Life Of Pets 2. Russia produced a chart-topping opening weekend take of $4.1m, 84% above the opening in that market of The Emoji Movie. The sequel’s UK tally climbed to $4.2m and next weekend will see a debut in Spain.

Sony Pictures International Productions’ local Spanish family comedy Padre No Hay Más Que Uno held well in Spain, down only 34% to $900,000 in its third weekend. The market total of $7.6m is the second highest this year for a local title, behind only Sony Pictures’ Lo Dejo Cuando Quiera.

Enlight Media’s animated smash Nezha added $39.5m to its Chinese gross, taking the film to a $594.3m total. Bona Film Group’s action film The Bravest took another $15.9m from China and two other territories (including the US, with $213,851), pushing its worldwide total to $205.6m.

Fast & Furious Presents: Hobbs & Shaw crossed $400m globally, with its international total climbing to $304.9m after a weekend tally from 67 territories of $45.9m.

The action thriller opened at number one in South Korea with $15.1m, a record for the franchise, beating the eighth installment by 51% and nearly trebling the opening of Fast & Furious 6.

Comedy Good Boys opened in 13 international territories producing a total of $2.1m. Among those markets, the UK and Ireland delivered $1m, putting the film at number six.

Universal/Working Title’s Yesterday added $1.2m from 45 territories, bringing its international total to $56.9m. The musical drama opened in China with $103,000.

The Lion King added $33.8m from 54 territories this weekend - down only 38% - pushing its global total to an estimated $1.43bn, making it the number nine release of all time globally (passing Avengers: Age Of Ultron’s $1.4bn) and the number two release of this year so far. The international total stands at $939.1m.

The CG remake held in top spot in Belgium (where it was down just 1%) and in second place in the UK and Ireland, France, Germany (where it dropped 23%) and other markets.

In Latin America, the film remained top in markets including Chile (where it dropped 19%) and Peru and second in Brazil (down 35%), Argentina and Colombia.

Toy Story 4 crossed the billion dollar mark last week after adding its $8.6m from 36 markets for a global total of $1.02bn, making it Disney’s fifth billion dollar release this year.

CBS Films / eOne’s Scary Stories To Tell In The Dark took $5.6m from 48 territories, for an international total of $14.1m.

The Guillermo del Toro-produced horror outing’s 10 new markets included Mexico, where it opened top with $2.8m from 2,300 locations, and Chile, where it managed $212,737 from 75 locations. Next weekend will see the film enter nine more markets, including the UK and France.

Dora And The Lost City Of Gold grossed $6.6m this weekend in 24 markets, for an international total to date (from 42% of the international marketplace) of $10.7m.  The UK produced a $1.4m opening weekend from 550 locations and France a debut of $1.2m from 490 cinemas.