'Rambo: Last Blood' to duke it out with 'It: Chapter Two' at international box office 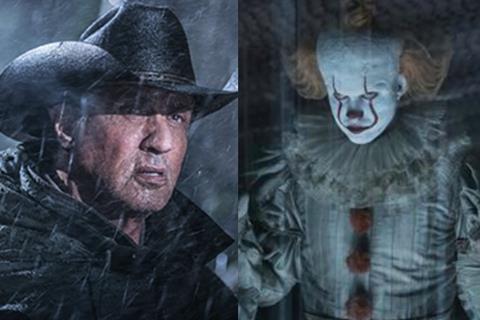 It: Chapter Two has dominated global and international box office for the past two sessions but Pennywise faces a stiff test this weekend when Sylvester Stallone’s Rambo: Last Blood launches in a heavyweight first international wave.

The action thriller opens day-and-date with its North American bow through Lionsgate, and Millennium Media licensees are ready to make some noise. Rambo is expected to deliver strong numbers in the UK, Australia and New Zealand, Germany, Russia, Brazil, Thailand and Hong Kong today (19), followed by Mexico, the Middle East, Sweden and Singapore, among others, on Friday. Rambo: Last Blood opened in the Philippines on Wednesday.

Adrian Grunberg directed Rambo: Last Blood from a screenplay by Matthew Cirulnick and Stallone. Paz Vega also stars in the story that sees Rambo dust off his weaponry and cross the border to confront a Mexican drug cartel and rescue his friend’s daughter.

It: Chapter Two has amassed $183.8m through Warner Bros Pictures International and $342m worldwide. The horror will still pack a punch as it surges past $350m worldwide in its third session, but the question is does it have enough to keep Rambo at bay.

Annabelle Comes Home stands at $151.2m and opens in Japan, where the last entry in the series, Annabelle: Creation, grossed $697,000 after it opened in November 2017. Gurinder Chadha’s Blinded By The Light has grossed $1.1m from Warner Bros markets and arrives in Brazil and Spain this weekend. Family drama The Goldfinch flopped in North America last weekend and ventures into France, while female-led crime drama The Kitchen, which similarly underperformed in North America, heads into the UK and Germany with the international running total at $3m.

Focus Features’ Downton Abbey is expected to hold well in its second session in the UK after the period drama launched on $6.5m to record a career-best UK bow for writer Julian Fellowes. Overall it has amassed an early $19.2m through Universal Pictures International and arrives in Germany, Spain, and Taiwan this weekend.

Hobbs & Shaw stands at $576.2m internationally, and the action thriller and Fast franchise spin-off has amassed $745.2m at the global box office.

Once Upon A Time… In Hollywood will cross $200m this weekend. Quentin Tarantino’s ninth feature has amassed $196m ($193.4m through Sony Pictures Releasing International and $2.6m from Bona Film) and will get a helping hand from Italy this weekend. Tarantino films typically do well there: The Hateful Eight opened on $3.8m and finished on $9.2m, while Django Unchained and Inglourious Basterds also showed good form, earning $4.6m en route to $16.3m, and $2.9m on the way to a $13.4m finish, respectively. Once Upon A Time… In Hollywood opens in South Korea next week. The Angry Birds Movie 2 stands at $73.8m and flies into Germany this weekend.

James Gray’s latest film arrives on the back of strong reviews in Venice Film Festival, and opened in the UK and France on Wednesday (18), followed by Australia, Germany and South Korea on Thursday, and Spain, Mexico and Japan on Friday. When Damien Chazelle’s First Man opened in the same bucket of markets it grossed $18m at current rates, while Denis Villeneuve’s Arrival managed $21m.

Latest international running totals for the Disney behemoths put The Lion King on $1.088bn, and Pixar’s Toy Story 4 on $626.7m.

STXinterantional’s Hustlers launched on $4.5m in its first international markets last weekend, day-and-date with a fine $33.2m number two debut in North America. The revenge caper starring Jennifer Lopez and Constance Wu has reached an early $6.8m and will not do much this weekend as the next major markets are Australia on October 10, France on October 16, and Italy on November 7.