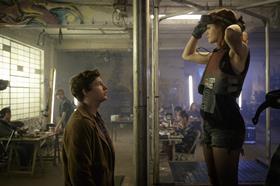 Ready Player One stands at approximately $232m internationally and arrives in the key market of Germany this weekend, which should play a role in propelling the international running total towards the $300m milestone.

Krasinski stars alongside his wife Emily Blunt in the acclaimed SXSW opener about an alien invasion that sends a family on the run from a lethal species that hunts what it can hear. Paramount’s family release Sherlock Gnomes stands at $9.1m.

Pacific Rim: Uprising should cross $200m this weekend. The sci-fi action sequel has grossed $102.7m through Universal Pictures International and stands at more than $190m including the China release via Legendary East. It debuts in Portugal and Hungary.

Rooney Mara and Joaquin Phoenix Biblical drama Mary Magdalene on $9m opens in Russia and the Catholic market of Poland, while the R-rated comedy and recent SXSW entry Blockers on $6.7m arrives day-and-date with North America in 11 Latin American and European territories including Sweden.

Smash family animation Peter Rabbit has amassed $134.5m through Sony Pictures Releasing International and opened in France on Wednesday where audiences are expected to boost the impressive running total. The film’s worldwide tally has crossed $246m.

Action adventure Jumanji: Welcome To The Jungle opens in Japan and has amassed more than $543m internationally and $946m worldwide.

Fox International heads into what looks to be relatively quiet session. Jennifer Lawrence spy drama Red Sparrow has taken $85.8m so far and infiltrates France, while gay comedy-drama Love, Simon gets launches in the UK and Brazil and stands at an early $2.1m.

Turning to the veterans, Oscar winners The Shape Of Water and Three Billboards Outside Ebbing, Missouri stand at $127.8m and $101.7m, respectively, while Ferdinand has amassed $211.2m, and The Greatest Showman $243.6m.