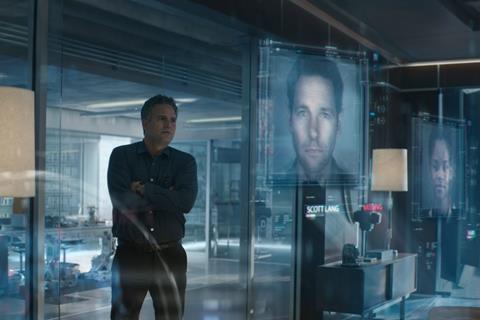 Avengers: Endgame remains on course for an unprecedented $1bn five-day global debut after racing to $644m worldwide through Friday that set international and global opening weekend records and the highest opening day in North America, climbing to $726.4m including a record-breaking Saturday in China.

Internationally, the climactic 22nd instalment in the first phase of Marvel Studios tentpoles grossed $487m by the end of Friday to overtake the former record international opening weekend of $443m set by The Fate Of The Furious.

The tentpole has reached $27m after two days in the UK, and followed up the record $15.3m Thursday opening day with the second highest Friday of all time behind Harry Potter And The Deathly Hallows: Part 2 (holiday launch).

Globally, Endgame has reached $644m and with Saturday and Sunday to go has established a new record, outpacing the $641m debut set last year by Avengers: Infinity War.

In North America, Endgame opened on a record $156.7m first day (including Thursday previews), and Disney executives are estimating a three-day haul in the $310m-$340m range pending Saturday and Sunday grosses that would smash the existing $257.7m opening weekend record established by Infinity War in the final weekend of April 2018.