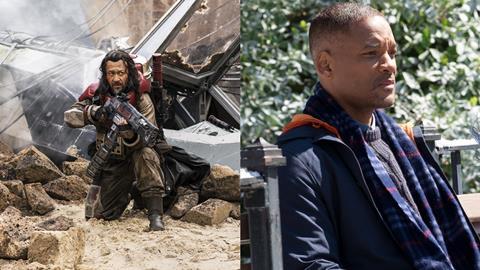 The stand-alone sci-fi episode from Lucasfilm and distributed through Buena Vista obliterated the competition on a confirmed $155.1m and grossed $290m worldwide, where it is in every major market except China and South Korea, which follow in the coming weeks.

Disney chief Bob Iger and his cohorts attempted to downplay expectations over the last couple of months, and while the film was never going to scale the opening weekend heights of The Force Awakens, exuberant early word from the first press and all media screenings blew away any concerns over the much publicised reshoots.

Disney brass said 62% of the audience watched Rogue One in 2D and 38% in 3D. Imax generated $19m from Imax and become the first film to be released on more than 400 screens in the format. This was the biggest Imax launch of the year and the second biggest in December behind The Force Awakens.

The $29.2m global Imax haul from 708 is a top five result of all time and trails only The Force Awakens in the December pantheon.

There were other films in release at the weekend. New Line’s drama Collateral Beauty delivered a dismal $7.1m launch in fourth place in 3,028 theatres, further highlighting the declining appeal of Will Smith outside highly marketed superhero or action films with an appealing ensemble.

The romantic musical added $4.1m for a $5.3m running total and would appear to be perfectly placed heading into holidays and the second phase of the awards season.

Amazon Studios’ Manchester By The Sea is also well positioned as the drama climbed one place to number seven after theatrical partner Roadside Attractions added 842 sites to bring the count to 1,208 as the drama added $4.2m for a $14.1m running total after five.

Paramount launched another title from its stable of awards contenders as Fences arrived at number 25 on $129,462 from four for a solid $32,366 average.

Denzel Washington directed and stars alongside Viola Davis in the adaptation of August Wilson’s play about race and family in 1957 Pittsburgh.

This week’s wide release is the Fox comedy Why Him? starring James Franco, Bryan Cranston and Zooey Deutch.