'Rogue One' heads into China

JANUARY 6 UPDATE: Rogue One: A Star Wars Story stands at $838.3m worldwide heading into its fourth session as it prepares to launch in China. 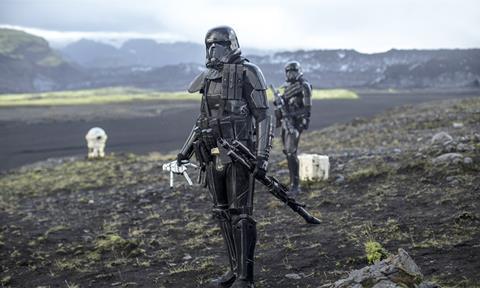 The film, distributed by Disney, added $9.2m on Thursday and produced $5.4m internationally to reach $383.1m.

That lags some way behind the $455.2m out of North America and Disney executives will be eager to see how Friday’s opening day in China and the ensuing weekend impacts on box office.

Star Wars was barely a known property before Star Wars: The Force Awakens opened there almost exactly one year ago.

JJ Abrams’ franchise reboot grossed $53m in its opening weekend but faded quickly. The $125m-plus final tally was a small piece of the film’s $2.1bn global haul and relatively small compared to other hits in China.

What seems safe to say is Rogue One should cross $900m worldwide by Sunday. If China delivers a big debut, $1bn could fall by the end of the weekend.

Marvel Studios’ Doctor Strange stands at $428.1m and Moana $203.7m ahead of debuts this weekend in Brazil and Chile.

Assassins’ Creed on $50.8m infiltrates around 20 territories through Fox International, among them the UK, Mexico, Russia and Italy. Why Him? On $17.8m arrives in eight including Hong Kong and Argentina.

Collateral Beauty stands at $23.4m through Warner Bros Pictures International and arrives in