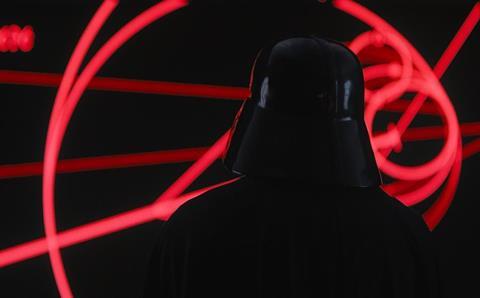 Rogue One: A Star Wars Story now ranks as the ninth biggest release of the year-to-date in North America on $318.2m and counting.

It will certainly vault another couple of places before year’s end. At this rate the Star Wars offshoot could pass the $368.3m mark set by The Secret Life Of Pets to become the third highest grossing film released in 2016, if not better. Rogue One stands at $573.8m worldwide.

Sing debuted at number two on $54.9m in 4,022 theatres, rising to $75.5m since December 21 opening day. The film reportedly cost $75m not including marketing costs, which the studio did not disclose.

Sony Pictures’ sci-fi Passengers – a long-gestating project that had many glittering Hollywood names attached over the years before settling on A-listers Jennifer Lawrence and Chris Pratt – delivered a disappointing number three debut on $22.7m in 3,478 sites, rising to $30m since December 21 opening day. The film reportedly cost $110m to produce before marketing costs.

Fox’s video game adaptation Assassin’s Creed starring Michael Fassbender, Marion Cotillard and Jeremy Irons opened poorly in fifth place on $14.8m in 2,970 rising to $22.3m since December 21 opening day. This was well below what the film needed to set it on the road to profitability, given the $125m price tag not including marketing costs.

Fox comedy Why Him? starring James Franco, Bryan Cranston and Zoey Deutch arrived in fourth place on $15.5m in 2,917 and according to reports cost $38m to make.

Paramount’s Fences enjoyed a superb weekend and climbed 18 places to number seven in its second weekend. Paramount expanded Denzel Washington’s awards contender from four venues to 2,233 and generated $11.6m for an early $11.8m.

Lionsgate’s La La Land ranks eighth on $17.1m after three, while Amazon Studios’ Manchester By The Sea sits in 12th place through theatrical partner Roadside Attractions on $20.8m after six. Jackie climbed two slots to number 13 in its fourth session through Fox Searchlight and added $1.9m for $4.2m after expanding by 264 to 348 sites.

Lion has begun to roar and climbed ten places to 14 through TWC, which expanded the footprint from 16 to 500 venues, adding $1.5m for $2.4m in the fifth weekend.

Paramount opened Martin Scorsese’s passion project Silence, a drama about the persecution of Christians in 17th century Japan starring Adam Driver, Andrew Garfield and Liam Neeson, at number 25 on $163,618 from four for a $40,905 average.

Warner Bros’ crime drama Live By Night directed by and starring Ben Affleck arrived at number 34 on $49,000 from four, while Focus Features launched A Monster Calls starring Felicity Jones, Sigourney Weaver and the voice of Liam Neeson at number 36 on $38,267 from four.

Overall the top 21 combined for $259.6m over the holiday weekend. There are no new wide releases this week. Next up will be Sony / Screen Gems’ Underworld: Blood Wars starring Kate Beckinsale and Theo James on January 6.