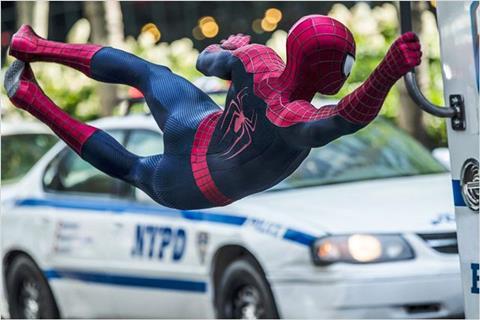 The Amazing Spider-Man 2 caught its competitors in its web as it retained the UK lead for the second consecutive week.

The Amazing Spider-Man fell over 70% in its third weekend with the arrival of The Dark Knight Rises, so the sequel will be hoping for a stronger hold as it attempts to surpass its predecessor’s $43.8m (£26m) UK result.

Despite being unable to make it a chart-topping UK/US debut weekend, Fox’s The Other Woman posted a strong $4.5m (£2.7m) debut, including previews, to chart second.

It’s worth noting that The Other Woman’s Fri-Sun tally of $3.3m (£2m) would have also seen it comfortably land second spot.

Including its previews over the Bank Holiday weekend [April 18-21], Wally Pfister’s directorial debut Transcendence recorded a $2m (£1.2m) debut from its 434 sites through Entertainment.

As expected, Captain America: The Winter Soldier has overtaken Iron Man’s $29.3m (£17.4m) in terms of Marvel Studios’ outings in the UK.

Ahead of its opening at JW3 today, Eytan Fox’s Cupcakes posted a $3,100 (£1,833) debut from its one site through Peccadillo Pictures.

We are the Freaks could only manage a $234 (£139) debut from its two sites through Metrodome.

Universal’s Bad Neighbours receives a saturation release from May 3, but won’t be counted in the official chart until May 9-11.