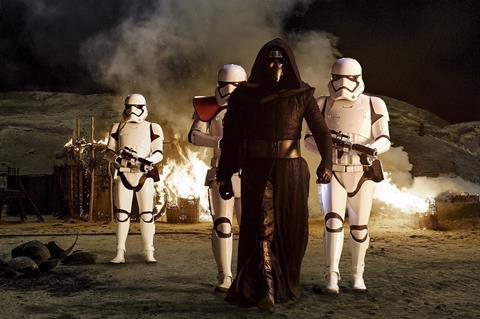 Combined with $129.5m after three international days - the figure had not been updated as of Saturday - the worldwide haul for Star Wars: The Force Awakens stands at $309.5m.

Studio brass said the film remained on track for a record-breaking $220m-plus after three days in North America.

Friday openers Spain and Japan have reached $3.5m and $3m, respectively. The Force Awakens touches down in India and Greece on December 24 followed by the final market of China on January 9, 2016.

Harry Potter And The Deathly Hallows - Part 2 holds the record for the biggest single day / opening day in North America on $91.1m in 2011.

The projected North American running total range combines with the $72.7m from the first two days of international for a worldwide tally of up to $198m that does not include Friday’s international grosses, which Disney will report on Saturday.

DECEMBER 18 MORNING REPORT: Fired up by a record $57m in Thursday evening previews across North America, the latest sci-fi episode has soared past $100m in two days.

The previous best score for Thursday previews was $43.5m set by Harry Potter And The Deathly Hallows – Part 2 in 2011. Disney sources said 3D accounted for 47% of the night, while Imax reported $5.7m (from 391 screens) of the $57m North American previews haul, doubling its previous best of $3m.

Star Wars: The Force Awakens has amassed $72.7m from two days of international play, ranking number one in all 44 markets by Friday. It rolls out in all its remaining markets on Friday including Japan and Spain.

The film scored the industry’s biggest single day in history in the UK on Thursday on $14.4m and also did so in Sweden on $1.7m on Wednesday (the film is up to $2.7m as of Friday) and Norway on $1.1m on Wednesday.

Germany recorded the biggest industry opening day of all time on $7.1m, as did Australia on $6.8m and Brazil on $2.7m.

There were record Disney opening days of $7.8m in France, $3.4m in Mexico and $3.1m in Italy. The studio achieved the same distinction in Denmark, South Africa, Czech Republic and Turkey.

Star Wars: The Force Awakens opens in India and Greece on December 24 followed by the final market China on January 9, 2016.

Separately, Disney executives reported that Inside Out stands on the cusp of a major milestone and has grossed $499.1m.