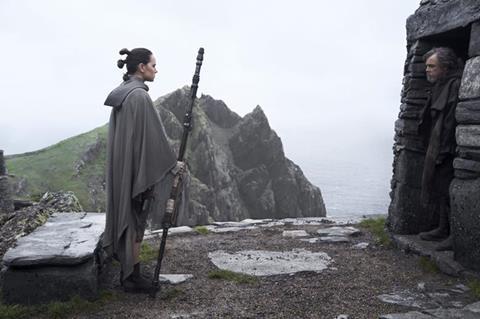 DECEMBER 29 UPDATE: Sci-fi smash Star Wars: The Last Jedi needs to deliver at least $39.4m this weekend to overtake Beauty And The Beast and end the year as the highest North American release of 2017.

Heading into its third weekend it seems almost certain Lucasfilm’s sci-fi tentpole will achieve the feat by Sunday, if not Saturday, and overtake the $504m final score established by its Disney stablemate. It added $19.4m in North America through Buena Vista on Thursday (December 28) to reach $464.6m.

DECEMBER 28 REPORT: Holiday tentpole Star Wars: The Last Jedi will cross $900m on Thursday (December 28) as it heads towards the $1bn milestone by the end of the weekend.

The Lucasfilm release grossed $48.2m on Wednesday to reach $891.8m worldwide and maintained an approximate 50-50 international-North America split, although the balance will tip in favour of the former after the sci-fi opens in China on January 5.

The Last Jedi stands at $446.9m through Walt Disney Studios Motion Pictures International following a $26.7m haul, and $444.9m in North America via Buena Vista after bringing in a further $21.5m.

Director Rian Johnson’s eighth episode in the 40-year franchise ranks comfortably as the second biggest release of 2017 in North America behind Disney’s Beauty And The Beast on $504m and stands a shot at overtaking that mark by January 1 to finish the year as the number one release.

Pixar’s Coco stands at $337.1m internationally and debuts in Australia, New Zealand, Italy and Hong Kong this weekend. The global tally is $506.8m.