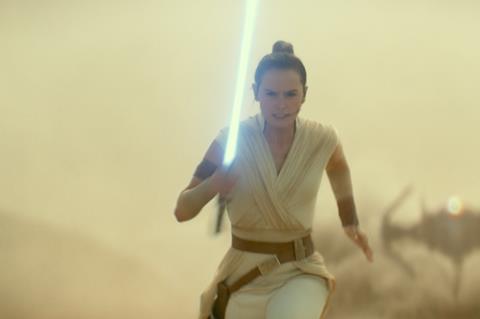 Daisy Ridley in Star Wars: The Rise Of Skywalker

DECEMBER 23 UPDATE: Star Wars: The Rise Of Skywalker opened to $376.2m at the worldwide box office, coming in at $198.8m internationally for a somewhat muted debut by the franchise’s lofty standards as it set the second or third highest debuts of 2019 in a number of territories heading into holiday season.

UPDATE: Star Wars: The Rise Of Skywalker had been expected to come in at more than $200m at international box office, possibly $250m, however it opened top in almost every market and is expected to hold well in the coming weeks.

The sci-fi, which marks the final entry in the third trilogy of a 42-year-old franchise, opened on $12.3m in Australia for the seventh highest of all time, and delivered $12.2m in China where its unspectacular arrival was expected as the property struggles to register with audiences in the way that other Hollywood blockbuster franchises have done.

UPDATE: Rian Johnson’s admired whodunnit Knives Out brought in $5.9m from 76 markets and has reached $95.6m internationally and $185.5m worldwide. China and the UK are the top markets after four weekends on $27.8m and $12.5m, respectively.

The film ranks third in Australia where it has grossed $6.6m after four sessions, and stands at $5.1m and $4.9m, respectively, in France and Russia after four. The next major markets are Germany on January 2, 2020, and Japan o January 31, 2020.

UPDATE: Tom Hooper’s all-star musical adaptation Cats, which has earned poor reviews in many quarters and blazed a trail of bewilderment in others, arrived in the UK in second place on $4.1m day-and-date with the dismal $6.5m launch in North America. The film faces another test this week when it creeps into 37 markets including France, Germany, Australia, South Korea, Mexico and Spain.

Rom-com Last Christmas with Emilia Clarke and Henry Golding used a $5.8m haul to boost the global running total to $111.1m, while $5.6m elevated international to $76.2m as that slice of the pie now accounts for roughly 68% of the worldwide tally. A $724,000 number six debut in Italy delivered the highlight of the opening weekends, and $951,000 in the UK in fifth place was the top hold as the tally there climbed to $22.3m after six weekends.

The Addams Family stands at $194.8m worldwide and $96.8m internationally, of which $80.6m comes from Universal markets. Horror reboot Black Christmas added $1.9m at the international box office for an early $6.4m running total, opening in Mexico in fifth place on $437,000, and Russia in eighth on $197,000. DreamWorks Animation’s How To Train Your Dragon: The Hidden World stands at $359.5m internationally, Downton Abbey $93.2m, and The Lighthouse $1.3m after opening in France on $191,000.