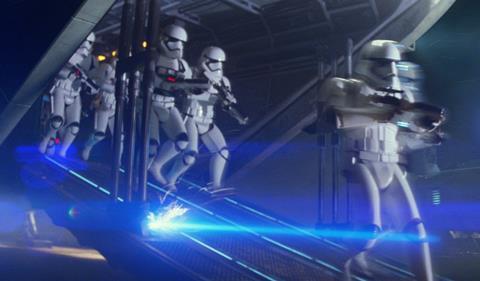 The session was not enough to usurp Avatar’s $50.3m fourth-weekend mark set five years ago but has pushed a film past $800m in North America for the first time.

Meanwhile, Fox scored a sensational expansion for The Revenant – nominated for four Golden Globes on Sunday night – as it vaulted 21 places to number two on $39.8m for $41.8m after three sessions.

Fox expanded the theatre count from four to 3,375 as box office climbed 8,385% week-on-week. The film will need to generate strong box office in the weeks to come in order to recoup the estimated $135m production cost, which does not include marketing.

Focus Features debuted The Forest starring Natalie Dormer on its Gramercy label at number four on $12.7m. The horror film has a stated price tag of $10m and is off to a decent start.

This week’s wide releases are Universal’s comedy Ride Along 2 with Ice Cube; animation Norm Of The North via Lionsgate; and Paramount’s Michael Bay action thriller 13 Hours.