APRIL 25 UPDATE: Disney’s The Jungle Book clung on to the highest vines in its second session as a confirmed $61.5m easily saw off the feeble challenge of Universal’s The Huntsman sequel and propelled the family hit to $192.2m. 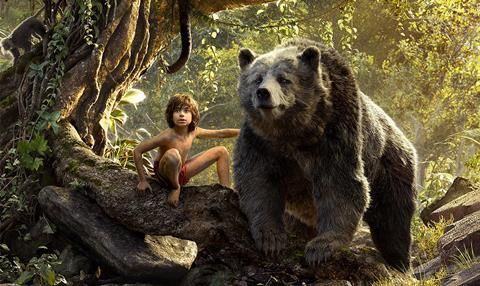 The Jungle Book directed by Jon Favreau already ranks as the fourth biggest North American release of the year-to-date and has amassed $528.5m worldwide. It dropped 41.1% in the second weekend.

The Imax running total from 377 North American screens jumped $5.6m to $18.4m after ten days and the film has grossed $39m worldwide in the large screen format.

The launch was approximately 35% of that of the $56.2m June 2012 franchise debut Snow White And The Huntsman (a fraction less when adjusted for inflation), which boasted the added star power of Kristen Stewart.

Cube Vision and MGM’s Barbershop: The Next Cut fell one place to number three and added $10.5m for $35.7m after two weekends through New Line-Warner Bros.

Disney’s Zootopia at number four has reached $316.4m after eight sessions and surged past $900m worldwide.

One other new release broke into the top ten as Pantelion opened the action comedy Compadres at number nine on $1.4m from 368 theatres.

Roadside Attractions debuted Tom Hanks starrer A Hologram For The King directed by Tom Tykwer at number ten on $1.1m from 401 venues, while Bleecker Street’s Eye In The Sky broke back into the top ten and has mustered $14.8m after seven sessions.

Fresh from last week’s Tribeca Film Festival world premiere, Elvis & Nixon debuted at number 20 via from Bleecker Street on $466,447 from 381 venues. Amazon Prime Video will debut the lighthearted drama on its SVOD and transactional platform 90 days after theatrical.

Overall the top 12 combined for $119.9m, marking a 28.6% drop on last weekend when The Jungle Book delivered that muscular $103.3m opening weekend. However the weekend gained 28.3% gain on the comparable session in 2015.

10 (-) A Hologram For The King (Roadside Attractions) Lotus Entertainment $1.2m –