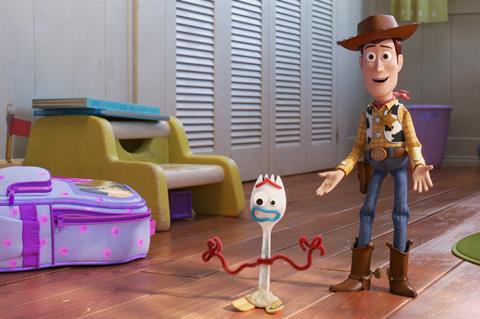 JUNE 24 UPDATE: Disney-Pixar’s Toy Story 4 delivered a record $244.5m global bow at the weekend that came with the added distinction of new opening weekend records in Mexico, the UK and Argentina.

The $120.9m North American result fell below some of the more hyperbolic forecasts, but this was a mighty start nonetheless powered by a $123.6m international debut from 37 markets, and sets the animation on course for a huge final gross.

UPDATED: Toy Story 4, the fourth entry in the 24-year-old franchise, beat the $235.8m global debut set by Incredibles 2 one year ago – although the films opened in a different number of markets and did not follow the exact international footprint.

Toy Story 4 opened in the UK on $17m for the highest three-day animated opening weekend of all-time. The film is yet to open in many markets such as France, Germany and Italy, as well as Japan. The film also opened top in Russia on $2.4m, double that of Toy Story 3, and arrived top in Spain on $3.7m. In the UAE, Toy Story 4 posted the second highest Disney Animation/Pixar opening weekend of all-time, behind only Incredibles 2.

The tentpole opened top in most its markets in Asia-Pacific, and opened higher than Toy Story 3 in nine of the 11 markets. It opened in South Korea on $8.5m as the second highest Pixar film of all time behind only Incredibles 2, arrived in second place in China on $13.7m, and debuted in Indonesia on $2m for the highest Disney Animation/Pixar opening weekend ever. The Saturday gross in Thailand scored a single day record for any Disney Animation/Pixar release, and the film opened on $1.4m overall.

The debut in North America was the best launch of the series, the fourth highest animated debut in history behind only Incredibles 2, Finding Dory, and Shrek 3, and the third highest debt of the year to date.

UPDATED: The Secret Life Of Pets 2 is approrachng $200m worldwide and now stands at $194.8m. It added $10.7m internationally to reach an early $77.2m and opened in second place on $4.2m in Australia, where it is expected to prosper heading into school holidays in two weeks’ time. The animation has amassed $22.2m in Russia after four sessions, and $21.5m in the UK after five. Octavia Spencer horror Ma stands at $56.8m worldwide, and $13.1m internationally. Jim Jarmusch’s The Dead Don’t Die stands at an early $3.9m internationally, of which $556,000 comes from Germany and $532,000 from Italy, both after two weekends.

Godzilla II: King Of The Monsters brought it a further $7.8m from 77 markets as the international tally climbed to $263.5m, and worldwide reached $366m. China has delivered $131.2m after four sessions through Legendary East, and Japan $22.7m after four. The monster mash-up debuted in Spain on $522,000.