After two days Marvel Studios’ Avengers: Age Of Ultron has soared to an estimated $44.8m from its first 26 territories, teeing up what looks likely to become an epic launch. 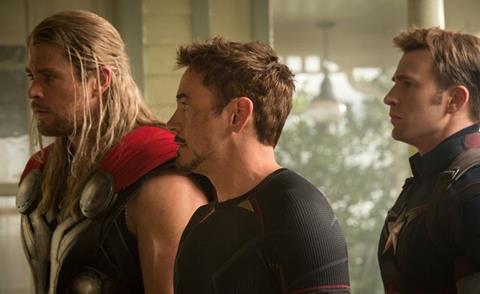 The superhero sequel, which arrives in North America next week, touched down in a further 15 territories on Thursday following Wednesday’s $9.5m haul from 11.

Among notable milestones, Ultron secured the third biggest Thursday launch and the top Imax opening day of all time in the UK and is tracking 40% above The Avengers, while South Korea produced the biggest admissions opening day in history and tracks 173% ahead of its 2012 predecessor.

Brazil delivered the biggest ever opening day for a Disney or Marvel release, Australia the second biggest behind The Avengers.

Germany delivered the biggest opening day for a Marvel Cinematic Universe film — which is to say the biggest launch out of the 11 Marvel Studios films released so far, from Iron Man through Ultron — and tracks 43% ahead of the original.

Russia, where the film tracks 65% ahead of The Avengers, generated the second biggest Marvel opening day and the third biggest Imax debut.

Ultron debuts on Friday in South Africa, India and Vietnam.