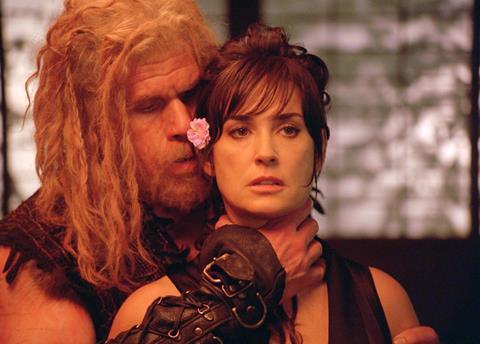 Not half as cool as it thinks it is, Bunraku flaunts style and attitude, but without any characters to latch onto the film quickly becomes an empty exercise in hyper-adrenalized genre filmmaking. Though buttressed by a name cast that includes Josh Hartnett and Woody Harrelson, writer-director Guy Moshe has concocted a self-consciously artificial “movie movie” in which every shot, idea, or line of dialogue feels borrowed from earlier films or other forms of visual art like graphic novels.

Making its debut as part of the Toronto Film Festival’s Midnight Madness section, Bunraku should appeal to the same crowds who embraced Sin City and Watchmen, although unlike those films this movie is an original work and not based on pre-existing source material. Hartnett and Harrelson could attract audiences, while actor and musician Gackt might prove to be a draw for Asian moviegoers. And Bunraku’s eye-popping visual design would seem to guarantee some sort of theatrical release, although the film’s defiantly offbeat tone might limit its appeal to genre fans.

In a future where guns have been outlawed, power is wielded by those cunning in the art of swordplay. Two strangers – a moustachioed, dapper drifter (Hartnett) and a samurai named Yoshi (Gackt) – come to a town ruled by Nicola (Ron Perlman), an evil warlord with a talent for axes. For different reasons, both Yoshi and the drifter have scores to settle with Nicola, and, with the help of a conniving bartender (Harrelson), they plot to bring down the warlord and his trusted cadre of assassins.

Working with archetypal characters and grand themes such as revenge and the nature of evil, Moshe (who previously directed the low-budget indie Holly) wants Bunraku to have a mythic, almost timeless quality in its storytelling. At the same time, he, cinematographer Juan Ruiz Anchia, and production designer Chris Farmer have dreamed up a world that feels cutting-edge with its colourful and noir-ish comic-book sets, not to mention the occasional incorporation of animation and even dance choreography into the overall aesthetic. As a result, Bunraku is a film that feels both fable-like and contemporary, placing commonplace characters into a rambunctiously ambitious visual creation.

Unfortunately, Moshe doesn’t display a gift for dialogue or plotting. His actors tend to deliver their pseudo-hip, pseudo-profound lines with an air of importance that starts feeling pretentious early on. Rather humourless, Bunraku also doesn’t build much narrative momentum because the film’s characters tend to want to do very little beyond expressing their inner thoughts as tedious monologues to each other. While there certainly is a sense that Moshe adores the universe that he and his collaborators have birthed, his script’s self-seriousness suggests a disconnect with the playful artificiality of the film’s look.

Bunraku is filled wall-to-wall with fight sequenes and because it exists in a universe without guns Moshe enjoys the luxury of being more creative with his action scenes than staging standard shoot-outs. Disappointingly, very few of the fight scenes truly captivate, though, a notable exception being a very entertaining and balletic showdown between the drifter and one of Nicola’s goons in an empty circus big top. Ignoring wirework for tight choreography, the fight sequences are fitfully engaging, although they’re undone by the fact that it’s hard to be too invested in the quest of such dull characters.

As the unnamed drifter, Hartnett seems intimidated by Moshe’s ultra-cool tone, delivering a performance that lacks much charisma or dark heroism. Even more problematic is Harrelson, who turns his bartender character into an ironic dispenser of wisdom and smart-alecky commentary, which begins to grate once it becomes obvious that it’s all he’ll be doing during the film’s protracted running time. Gackt comes closest to nailing Bunraku’s casually detached spirit, while on the other end of the spectrum Demi Moore (playing Nicola’s whore) strains to give her character a gravitas that mostly comes across as borderline campy. As for Perlman, Nicola is yet another of the sort of badass characters that he plays almost exclusively these days. Bunraku populates its world with many wannabe tough-guys, but Perlman’s the only one in the cast who can do it without breaking a sweat.