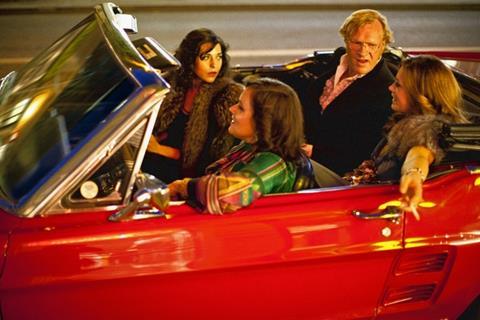 Based on the true story of a prostitution ring that threatened to bring down Sweden’s Socialist government in the 1970s, Swedish TV director Mikael Marcimain’s feature debut weaves together a vivid tapestry of the period, focusing on three interlocking areas: a wayward girl seduced into the world’s oldest profession; the fast-living ways of the Madam, her husband and their harem; and the police and government officials, working towards—and against—her capture.

Call Girl becomes more an extensive mood piece than a character-driven story—a profound examination of widespread corruption to the swinging disco tunes and brown hues of the 1970s.

More in line with Tinker Tailor Soldier Spy (for which Marcimain worked as a second-unit director) than The Girl With The Dragon Tattoo, this sometimes convoluted, overlong political thriller lacks a compelling protagonist to drive its more than two-hour story.

But Call Girl attempts to make up for this deficiency with a powerful attention to mood, period detail and a damning argument about the hypocrisies of Sweden’s liberal politic. With frequent cutaways to government meetings and campaign promises on the eve of the country’s 1976 selection, Marcimain highlights the cruel irony of promoting women’s liberation at the same time the country was decriminalising incest and covering up the sexual exploitation of underage girls.

Call Girl might make for hot-button fodder in Scandinavia, but its story of sex and scandal—and ample scenes of sexy, scantily clad women—certainly won’t hurt its marketability internationally. However, the film doesn’t satisfy the most basic narrative expectations.

Most problematic may be the opacity of its main characters. The film singles out the story of one young girl, Iris. Dropped off by her mother at a home for troubled juveniles, the teenage girl slowly finds her way into a world of sexy parties, each one more troubling and illicit than the last. Before she knows it, the sleepy blonde becomes the youngest member of infamous Stockholm Madam Dagmar Glans’s troupe of hookers.

Marcimain’s intention may be to portray Iris as a total innocent, completely unaware and impervious to changing her fate—the antithesis of Lisbeth Salander—but in so doing the character is as flat as a board. The same blankness pervades the stone-faced young vice detective out to expose the case. The only part given dimension is Glans herself. As played by Swedish stalwart Pernilla August, the prideful old prostitute turns from motherly to cruel on a dime, sweet-talking Iris one second and then slapping her the next. And August relishes every moment of it.

Thus, Call Girl becomes more an extensive mood piece than a character-driven story—a profound examination of widespread corruption to the swinging disco tunes and brown hues of the 1970s. From Abba to the BeeGees, from IKEA-like modern furniture design to bellbottom pants and platform shoes, to reel-to-reel recorders and phones that look like bananas (or dildos), Marcimain and his crew have created an extraordinary evocation of the period. The era even infects the camera and score, with the film’s use of occasional zooms and pop beats. But it’s a cold movie, always keeping its audience at a safe distance, likely to be neither outraged nor moved.