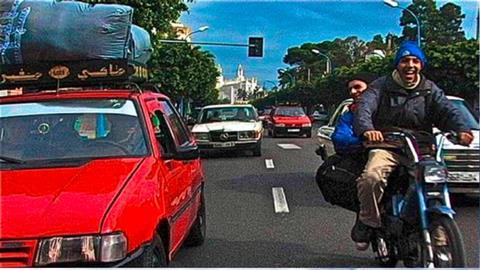 A haphazard movie road trip through Morocco, Casablanca Mon Amour is an engagingly rambling musing onthe long-entwined relationship with Hollywood and the Arab world, as young Moroccan movie fans Abdeland Hussan travel across the country gauging local opinions on who are the favourite movie stars of ordinarypeople (Charles Bronson and Chuck Norris come out on top) and visit locations where films were shot.

The pair head off on a road trip across the country, with Slattery intercutting their journey with extracts of a limited selection of Western films.

A smattering of clips are used to illustrate how Hollywood shockingly often portrays “evil Arabs” and Abdel and Hussan work well as a pair of entertaining guides, especially when talking to ordinary folk. The film had its world premiere at the Dubai International Film Festival.

The film opens with director John Slattery selecting his ‘stars’, eventually settling on Abdel (21, a Capricorn as Abdel engagingly states) and Hassan (22, a Gemini) as the twosome who act as guide into Morocco’s love for action cinema and how the Arab world has been presented in cliché form on screen over the years.

The pair head off on a road trip across the country, with Slattery intercutting their journey with extracts of a limited selection of Western films – all presented in muted black-and-white and ranging from Chuck Norris action flicks through to Carry On Up The Khyber – with Abdel increasingly dwelling on how “evil Arabs” are presented.

Their vox pop with locals on their favourite stars is engaging, but the film is at its best when the pair visit locations where films were made, with a trip to the Atlas Studios at Ouarzazate (which offers important jobs for locals, and where films such as The Man Who Would Be King, Babel and Kingdom Of Heaven were shot) an engaging highlight.