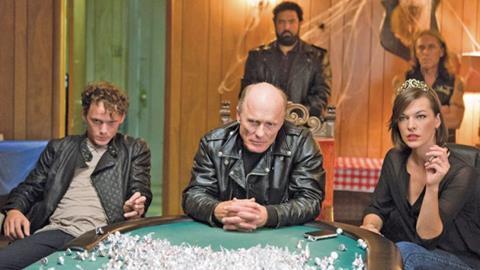 Fourteen years after his 2000 Hamlet, recast as a NY corporate dynasty drama, director Michael Almereyda returns with another Shakespeare reboot featuring an equally high-profile cast. This time, though, the choice of play is risky to say the least: Cymbeline, a little-read and less-performed yarn set in Ancient Britain featuring disguised princesses, sleeping potions, long-lost sons unaware of their royal descent, and more coincidences than a 1950s Hollywood melodrama.

For all Almereyda’s bravura and courage, and the cast’s verve and talent, the question of ‘Why adapt Cymbeline?’ is never really answered here – other than by a defiant ‘Why not?’.

It’s credit to the director’s vision and belief in the material that for much of its running length Almereyda’s blue-collar America, bikers-versus-cops version of one of the bard’s less essential works surfs along ebulliently on the wave of its own inventiveness. Selfies, Google maps, skateboards and other paraphernalia of modern life are yoked engagingly into a fresh and perky makeover. And if the sheer contrivance of the plot begins to tell two-thirds of the way in, as we struggle to keep up with the disguises and double-crosses, a final shoot-out scene that tips a wink to the absurdity of the whole dramatic edifice just about saves the day.

This finale also reveals the holes in the budget of a film that can only marshal a couple of patrol cars and a handful of Harleys for what is supposed to be a grand settling of accounts. But there’s an upside to the film’s indie approach too: Harris, Jovovich, Hawke (the lead in Hamlet, here in a tasty smaller role) and the rest all look like they’re having great fun with the material, spurring each other on in a film in which most of the cast, we imagine, must be working for scale.

Scored by electro-ambient club music and songs that include Toots and the Maytals’ Pressure Drop, the film is set in a Springsteen-esque Eastern seaboard town, a place of auto workshops, convenience stores and parking lots, where, an opening title informs us, the “Briton motorcycle club is in an uneasy truce with the Roman police force”. Harris plays the ‘King’ of the Britons, a leather-jacketed Hells-Angels-style patriarch with family issues.

The Briton ‘court’ is a townhouse stuffed with the kind of antique furniture and fittings that denote wealth without taste; here the King lives with his radiant, delicate teen daughter Imogen (Johnson) and slinky, scheming second wife and Queen (Jovovich). Under the latter’s influence, the King refuses to pay the ‘tribute’ that the Romans demand – in other words, he tells the local police chief that he can no longer expect a rake-off from the Britons’ crime and business takings.

Imogen has secretly married dashing young-but-poor skater boy and royal protégé Posthumus (Badgley), a match which enrages the King, who, under the Queen’s influence, has arranged Imogen’s marriage with her wastrel son Cloten (Yelchin). Banished from court, Posthumus is goaded into accepting a wager proposed by sly Iachimo (Hawke), who will attempt to seduce the princess to stand up his claim that there’s no such thing as a pure, unassailable woman.

Admitted to Imogen’s quarters as a messenger from Posthumus, Iachimo first tries to convince her that her man is playing the field by showing her photo-shopped iPad pics of him with other women. When this doesn’t work, he has himself trojanned into her bedroom inside a loudspeaker case and, while she sleeps, takes compromising photos on his smartphone, including a snuggle selfie.

That’s just the start of a story that piles bizarre twist on unlikely coincidence. The inventiveness never lets up – as when Imogen, now disguised as a boy and on the run, decides to call herself ‘Fidele’ after spotting a Che Guevara t-shirt. But the effort to keep up with the Shakespearian prose (edited back, but not modernised) and the increasingly convoluted plot begins to take its toll on the audience’s patience well before the final shoot-out scene makes a reckless, heroic attempt to wrap all the unresolved mysteries and misunderstandings. For all Almereyda’s bravura and courage, and the cast’s verve and talent, the question of ‘Why adapt Cymbeline?’ is never really answered here – other than by a defiant ‘Why not?’.

Screenplay: Michael Almereyda, based on the play by William Shakespeare