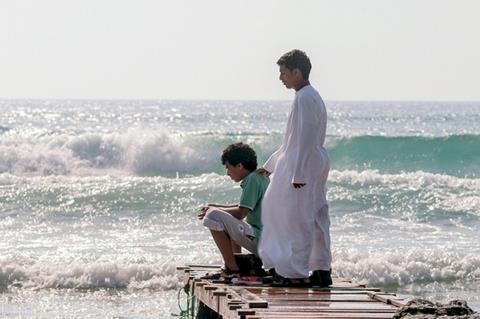 A gently-paced but ultimately intriguing film, Emirati director Waleed Al Shehhi’s first feature film, Dolphins – which won the IWC Filmmaker Award at the 2013 Dubai International Film Festival – had its world premiere at this year’s DIFF and marks him as a filmmaker to watch. The interweaving plot and languid pace mark it out as an art house effort, and while lack of pace and star names will likely make it a tough sell theatrically it has the credentials to feature at further film festivals.

Technically Dolphins is impressive, with the backdrop and scenery as important as the three lead characters as their day-long journey.

Dolphin fans may be disappointed to know that there isn’t an actual dolphin to be seen in the film – these are metaphorical dolphins – but there is plenty of beauty in sea and land here, thanks to Thai cinematographer Phuttiphong Aroonpheng’s work and a melodious score by Ebrahim Al Amiri.

The film is based around three characters - a divorced couple and their son – as they head off on a trip of reflection and discovery. The son Saoud (Ahmad Al Jarn) is ejected from his mother’s (Bahraini actress Reem Erhama) house as she is readies herself her remarriage. Saoud and his friend Hilal ramble from beach to beach on Saoud’s motorbike. Meanwhile Saoud’s ambulance driver father Fadel (Khalid Ameen), is largely out of the picture, but Saoud thinks of him every time he hears an ambulance siren.

Each of the threesome has to deal with their own issues and problems, and while Waleed Al Shehhi works hard to bring his characters to life the inner struggles don’t amount to a great deal in the way of exterior drama, with the film favouring a slow-moving story over a gripping plot. Technically Dolphins is impressive, with the backdrop and scenery as important as the three lead characters as their day-long journey, but while its languid pace suits the story perhaps Waleed Al Shehhi (director, producer and editor) be better served with another voice to help make his creative choices).