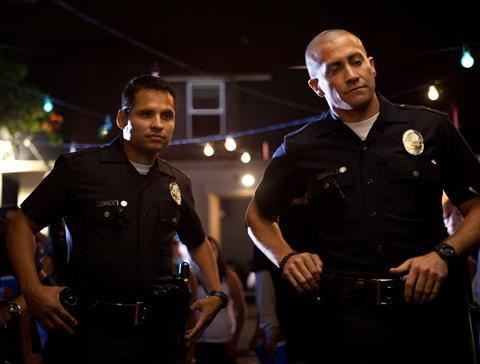 With his screenplay for the Denzel Washington Oscar-winner Training Day and his subsequent features Harsh Times and Street Kings, writer-director David Ayer has meticulously chronicled the dangerous, ethically slippery world of the Los Angeles Police Department. His new film, End Of Watch, doesn’t break much new ground on the subject, but it’s nonetheless an intensely rendered and superbly acted drama.

In his previous films, Ayer has dramatised the mental and emotional demands required to be a police officer, and in this regard End Of Watch can be seen as a further refinement of his years-long fascination with law enforcement.

This Open Road release premieres at the Toronto Film Festival and will then head to US theatres on September 21. Despite the presence of Jake Gyllenhaal and Anna Kendrick, however, End Of Watch will have a hard time distinguishing itself from a handful of other recent cop dramas available on the big or small screen. With award possibilities unlikely, this stubbornly riveting little drama will probably be lost amidst the Oscar-season rush.

End Of Watch focuses on the lives of officers Taylor (Gyllenhaal) and Zavala (Michael Pena) as they go on patrol and hang out together during their off-duty hours. Because Taylor wants to document the reality of their jobs, he carries a digital camcorder and places mini-cameras on his and Zavala’s uniforms, and quite often the audience watches what transpires through these POV shots. Though largely episodic, End Of Watch eventually introduces a narrative thread concerning an encroaching drug cartel that has targeted the two cops for execution.

In his previous films, Ayer has dramatised the mental and emotional demands required to be a police officer, and in this regard End Of Watch can be seen as a further refinement of his years-long fascination with law enforcement. And although the film’s found-footage gimmick adds little — it seems preposterous that either the cops or their adversaries would be toting around cameras — the technique flows seamlessly with the movie’s handheld camerawork, which is quite gripping during the unexpected shootouts and tense confrontations that greet our heroes.

This character drama succeeds largely thanks to Gyllenhaal and Pena’s camaraderie as partners who are able to mock each other’s cultural differences but still be as close as brothers. With a lived-in authenticity, Ayer’s leads reveal how these two cops share a bond that no one, not even their significant others, can truly understand. End Of Watch has the twitchy anxiety and random violence of a war film, and Gyllenhaal shows some of the same rugged strength he brought to Jarhead in his portrayal of the cocky, sarcastic Taylor. (Pena is just as funny and effortlessly commanding as his co-star.) Even if much of End Of Watch is familiar, Gyllenhaal and Pena tackle the material with gusto, complementing Ayer’s hard-edged worldview.

As a further indication of End Of Watch’s ability to overcome its clichéd storyline, Kendrick does fine work in what could be the predictable role of Taylor’s kind-hearted new girlfriend Janet. But Kendrick displays not just sweetness but also a grownup grit, making Janet a smart woman who knows full well the implications of falling in love with a man who puts his life in danger every single day.