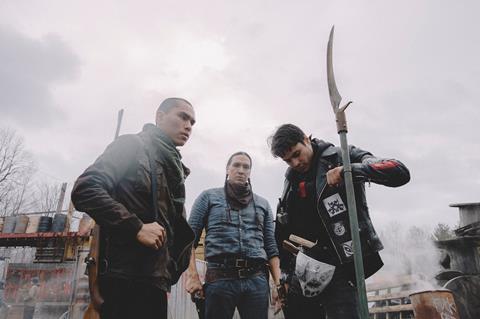 After selling out at Cannes 2018 on Midway, AGC Studios is back in the Roland Emmerich business with the $150m sci-fi Moonfall. Emmerich will attend a buyers presentation and talk up the costly project about a scratch team dispatched to stop the moon from colliding with Earth. Previously set up at Universal, production is due to begin in early 2020, with Emmerich’s Centropolis Entertainment producing.

Voltage Pictures will launches sales on Liam Neeson thriller The Minuteman, in which the action ace plays a Vietnam veteran who must protect a youngster being hunted by a drug cartel.

Uma Thurman is set to star in the sci-fi Tau Ceti 4 on IMR International’s sales slate. John McTiernan will direct the story about a trio of armed strangers who arrive on a war-torn planet and set about destroying the various oligarchs and military thugs who terrorise the place.

Capstone division Blue Box International launches sales on Mel Gibson-Kate Bosworth action thriller Force Of Nature, about a cop who protects occupants of a house from an attempted heist during a hurricane. Michael Polish will direct in Puerto Rico in July.

Kate Beckinsale is in the mood to flex her comedy chops and will also star in Jolt for Millennium Media. Tanya Wexler (Hysteria) directs her as a bouncer who wears a special vest that delivers electric shocks when she gets too angry. When her first love is murdered, she goes looking for revenge. Production is set for July in the UK and Bulgaria.

Endeavor Content is selling Harry Haft from BRON Studios, New Mandate Films and Creative Wealth Media. Barry Levinson directs Ben Foster in the true story of a man forced to fight other prisoners to survive Auschwitz, who becomes a postwar boxer as he searches for his first love.

Fortitude Entertainment jets into Cannes with Fatman, a dark comedy in which Mel Gibson will play a rowdy Santa Claus whose business is in disarray and who becomes the target of a hit taken out by a disgruntled child who received a lump of coal for Christmas. Ian and Eshom Nelms (Small Town Crime) are directing, and production is set for early 2020 in Canada.

Seville International has Competition selection Matthias & Maxime from French-Canadian filmmaker Xavier Dolan, who returns to the Croisette with a story about two childhood best friends whose lives are changed after they share a kiss on a student short film. Nancy Grant and Dolan produce.

XYZ Films will show a promo of Blood Quantum, which stars Michael Greyeyes, Elle-Maija Tailfeathers and Forrest Goodluck and follows a zombie outbreak near an isolated Native American reserve whose inhabitants are immune. XYZ is producing Quantum Blood with Prospector Films.

Visit Films commences talks with buyers on the Spanish-language Tribeca selection Initials SG, starring Diego Peretti and Julianne Nicholson. The story is of an ageing Argentinian crooner stuck with a challenging career.

Radiant Films International will screen recent Tribeca audience winner Plus One starring rising comedian Maya Erskine and Jack Quaid. The directing debut of Jeff Chan and Andrew Rhymer follows two best friends who agree to be each other’s companions during a summer of weddings.

Magnolia International will screen the SXSW world premiere Body At Brighton Rock, a survival thriller about a part-time state park employee who must spend the night at a potential crime scene until back-up arrives after she takes a wrong turn and gets lost. Karina Fontes stars and Roxanne Benjamin directs.

Toronto genre specialists Raven Banner kick off talks on 2 Miles Below, a survival thriller about Appalachian coal miners trapped underground after an explosion with only one hour of oxygen remaining.

Arclight Films arrives with Lady Driver, about a rebellious teen who follows in her late father’s footsteps as a dirt-track racer. New distributor Forrest Films will release in the US in October. Grace Van Dien, Sean Patrick Flanery and Christina Moore star.

FilmSharks will show footage of CGI and stop-motion animation Dalia And The Red Book. The story follows the eponymous 12-year-old who is kidnapped by characters in her late father’s novel.

Cinema Management Group has animation Away, which tells the story of a young boy as he travels across a mysterious land, traversing deserts and forests while pursued by a dark spirit. Gints Zilbalodis’s film will premiere in Annecy’s new Contrechamp section in June.

Double Dutch International has Long Gone Heroes, starring Ben Kingsley and Guy Pearce in the story of mercenaries who head to Myanmar to rescue a reporter and find themselves being hunted by former comrades.

VMI will be talking up the Aaron Eckhart conspiracy thriller Wander, which has April Mullen directing. Eckhart plays a mentally unstable private investigator who becomes convinced a suspicious death case is linked to a cover-up around the death of his daughter. Production is set for June in New Mexico.

Epic Pictures has The Ballad Of Audrey Earnshaw starring Catherine Walker and newcomer Jessica Reynolds in the story of a young woman and her domineering mother on the outskirts of a Protestant settlement whose farmstead remains intact after a plague. Telefilm Canada, HorizonOne Investor Group and Epic Pictures are funding the film.

Myriad Pictures will launch sales on Tate starring Kate Bosworth as Sharon Tate. Michael Polish directs the appreciation of the life of the actress who was murdered by Charles Manson’s cult.

Red Sea Media has Walk To Vegas, based on a true story about a struggling actor who creates the biggest underground poker game in Hollywood, and whose players bet he cannot walk from Los Angeles to Las Vegas in seven days.

Hyde Park International will be talking up horror-thriller Hide And Seek starring Jonathan Rhys Meyers and Jacinda Barrett. The story centres on the secret world of squatters who take over the homes of rich people. CJ Entertainment developed, financed and produced.

PureFlix/Quality Flix has Wish Man, the true story of the founder of the Make-a-Wish Foundation. It world premieres on June 4 and the cast includes Andrew Steel, Kirby Bliss Blanton, Bruce Davidson, Danny Trejo and Dale Dickey.

Bleiberg Entertainment has boarded international rights to thriller The Orchard starring Thomas Jane and Katrina Bowden. Production has wrapped on the project about a sheriff who discovers a malevolent force at the scene of a crime.

Concourse Media has picked up sales rights to Henry Alex Rubin’s Edge Of Dawn (formerly Semper Fi). Karina Miller of Sparkhouse Media and David Lancaster of Rumble Films are producing the story about a police officer and his friends who must break out his younger brother from prison after he is incarcerated following a bar fight.

AMBI Distribution has boarded worldwide rights to Dakota, a family action-adventure in which Megan Fox plays a mother who struggles to maintain her small-town farm following the death of her husband in Afghanistan.

MPI Media Group has a market premiere screening of Girl On The Third Floor, Travis Stevens’ film about a family man who tries to renovate a rundown mansion with a sordid past, only to find the house has other plans.

Premiere Entertainment Group has worldwide excluding Middle East on Pharoah’s War, an action film shooting now in Egypt that stars Mike Tyson and Hafthor Julius Bjornsson (The Mountain from Game Of Thrones). Tyson plays a former military man who leads a group of Egyptian refugees through the desert and protects them from mercenaries.

Highland Film Group will tempt buyers with Happy Life starring Evangeline Lilly as a new mother who suspects her husband is having an affair with an Instagram star. One mistake after another lead her into another man’s arms.

Blue Fox Entertainment has SXSW comedy Come As You Are, a remake of Belgian comedy Hasta La Vista, about three youngsters with disabilities who go on a road trip to a Montreal brothel that caters to people with special needs. Gabourey Sidibe, Grant Rosenmeyer, Hayden Szeto, Ravi Patel, and Janeane Garofalo star.

Octane Entertainment arrives with Being Frank, a comedy from Miranda Bailey that stars Jim Gaffigan. The story centres on a youngster who stumbles on his father’s secret life out of state. The Film Arcade will release in the US on June 14.