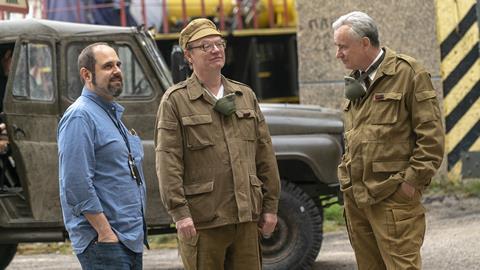 Craig Mazin doesn’t seem a likely candidate to make a television project about a real-life European nuclear disaster. The American screenwriter, known for credits on feature comedies like The Hangover Part III, Identity Thief and Scary Movie 4, hadn’t worked in TV before, or on anything remotely resembling Chernobyl, a hard-hitting dramatisation of the 1986 power plant accident in what was then the Soviet republic of Ukraine.

But looking for new writing challenges about five years ago, Mazin says he became “obsessed” with the events depicted in the HBO/Sky miniseries - which he created, wrote and executive produced and which debuts in the UK and the US on May 6 – because of their relevance to the present day.

“The aspects I found moving were the stories about human beings who are required to suffer and sacrifice because other human beings had lied,” Mazin explains. “And we’re swimming in this right now. Across the globe there’s a war on the truth. Chernobyl is a kind of allegory of the danger of elevating narrative above truth. We may have thought that the Soviet Union was the government that lied to everybody all the time – well turn on your TV today and you’ll see more of it.”

The miniseries – starring Jared Harris, Stellan Skarsgard and Emily Watson and directed by Johan Renck – tells those stories over five episodes, dealing first with the struggle to control the explosion before it could become an even bigger catastrophe, then with the tragic consequences for some of the ordinary people involved and finally with the hearing at which the truth about the explosion was finally revealed.

Selling the project to HBO was probably facilitated, Mazin concedes, by the fact that Chernobyl also has its genre elements. “There’s a core relevance,” the miniseries’ creator says, “but inside of that it’s also a horror movie, a war story, a tragic romance, a political thriller.”

Also helping Mazin’s cause was the fact that he pitched the project to the premium cable network in the company of fellow executive producers Carolyn Strauss, a former HBO Entertainment president who has since served as an executive producer on the network’s Game Of Thrones, and Jane Featherstone, CEO of UK production company Sister Pictures.

Though the physical production was hardly straightforward – with around 100 speaking parts, the miniseries shot for more than three months in Lithuania and Ukraine – Mazin says that even as a TV neophyte his dealings with HBO felt “frictionless, especially coming out of movies.

“I always say there are two kinds of movies: movies you cannot get made, no matter what, and movies you can’t stop from being made, no matter what. And in both cases there’s always something going wrong. Here, the process just went so smoothly. HBO, and then Sky, were incredibly encouraging and generous, both of spirit and of resources. They let us make the show we wanted to make.”

The appeal of TV

As a result, Mazin (whose most recent feature gig was a brief stint on Elizabeth Banks’ upcoming Charlie’s Angels reboot for Sony) is now eager to do more work in TV.

“And from a practical point of view, in television the writer is treated the way a writer should be treated. In features, at least here in the US, writers are treated poorly, and that is a terrible mistake. I feel a bit like someone who’s been working in the darkness for a while who’s now emerged into the light.”

In particular, Mazin reports that he is talking about “a bunch of projects” with HBO. The one he’s likely to start writing soon is another limited series take on a real-life story, only this time with a more local (to the US) and contemporary setting. “It’s something that’s takes place much closer to home and much closer to now,” he hints.