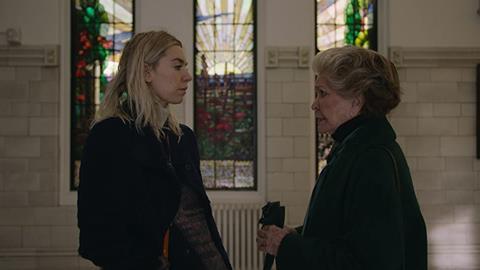 Now in her seventh decade as a screen actor, six-time Oscar nominee Ellen Burstyn is respected for her talent, dedication and instinct for powerfully dramatic roles. Screen talks to her about the fierce - but loving - matriarch in Pieces Of A Woman

In other hands, the character of Elizabeth in Kornel Mundruczo’s Pieces Of A Woman — the overbearing mother of Vanessa Kirby’s Martha, and a woman who wears her impossibly high standards unapologetically, like a mink coat — could have been a one-dimensional antagonist. But Ellen Burstyn fills the character with fierce, angry love. Burstyn found much to admire in this difficult woman whose instinct is to fix whatever is broken in her children’s lives.

“She is someone who wants to spare her daughter pain,” says the actress. “I think it’s something that mothers very often want to do.” Elizabeth’s predicament is the fact that some things, like the death of Martha’s newborn (this film’s traumatic inciting incident, in which a home birth goes disastrously awry), cannot be easily patched up.

The depth of the writing, says Burstyn, was evident from her first reading of Kata Weber’s screenplay. “I think Kata did a wonderful thing when she introduced [Elizabeth], and her staging. You see a chair and it’s just a chair. But you put a cushion on it, and it brightens up, it becomes something else. That seems to me to be a clue to her character. She fixes things up. She makes them better. I think that she reacts to her daughter’s tragedy in that way.”

This instinct to swoop in and rearrange her daughter’s life leads to mounting conflict between the pair, conflict that reaches an explosive climax at a family gathering. Burstyn burns through a remarkable monologue, giving an account of her own early life as a Holocaust baby. “It’s one of those scenes, because it was so important, it kept on being rewritten and worked on,” she says. “Kata had written that wonderful description of how Elizabeth had come into the world. But leading up to it and away from it kept changing.”

Key to realising the incendiary power of the scene was a note from Kirby. “Just as we went to do my take, Vanessa said, ‘Make me go to court.’” (Elizabeth is urging her daughter to sue the midwife.) “So I did the speech as written, fulfilling it as best I could, but the moment that it was over, I suddenly flashed that I had not made her go to court. So then I added on the next part: ‘You have to speak your truth, you have to say how it makes you feel.’”

The emotional connection between Burstyn and Kirby that is amply evident on screen was mirrored by a real-life bond. “As soon as she came into my apartment, Vanessa and I looked at each other and there was a spark between us. We recognised each other.” Burstyn invited her for what they now describe as “a pyjama party”. The result was a lasting bond. “I just had a phone conversation with her today. We talk frequently, even though she is in London and I am in New York. I feel very maternal towards her, she’s a wonderful woman.”

If Burstyn is nominated for an Oscar this year, the 88-year-old — who last received Oscar attention in 2001 for her gutsy performance in Darren Aronofsky’s Requiem For A Dream — will break the record currently held by the late Christopher Plummer for the oldest acting nominee. It would also be her seventh nomination.

Burstyn’s film career, which took off in the 1970s — a rich period for US cinema but also very male-driven in terms of stories — has encompassed seismic changes in the industry. Pieces Of A Woman, she agrees, is the kind of film that would never have been made when she was breaking through. “There’s a huge change. When we did Alice Doesn’t Live Here Anymore, I was very conscious it was a story told from a woman’s point of view. All of the films in the past which had female leads, they were female leads from a man’s point of view.”

There is, however, a coincidental link between Alice and Pieces Of A Woman, in that the earlier film’s director Martin Scorsese was so impressed by Mundruczo’s picture, he boarded as an executive producer. (Pieces Of A Woman is lead produced by Canada’s Bron Studios, and was bought by Netflix after its Venice premiere.)

“He grandfathered the film,” says Burstyn. “Marty interviewed us — Kata, Kornel, Vanessa and myself — and it was so interesting to hear him talk about the film. I really appreciated the way that he picked up on little things that I hadn’t heard anybody else notice.” Scorsese’s acute eye noted a hint, at the very end of the film, that Elizabeth is beginning to lose her sharpness. “Nobody else mentioned that tiny incident in the film, but he saw it. He understood the implication of it. The story went on for me, dealing with dementia.”

After her role in box-office hit The Exorcist, Burstyn was granted a lot of freedom with her next project. Alighting on the script for Alice, Burstyn was given the chance to direct herself, before being instrumental in the appointment of Scorsese. “I said, ‘No, I am not ready to act and direct at the same time.’ On one hand, I wish I had said yes.”

Burstyn is still waiting to make her film directing debut, with a project, titled Bathing Flo, which has turned out to be a dispiriting experience. “Getting a film financed is one of the most difficult parts of the business. I have been working on it for a couple of years now, and I must say, it’s very discouraging. Will I ever get to direct? I don’t know.”

The acting work, however, shows no sign of slowing. Her next release is At Last (aka Never Too Late), a romantic comedy set in a retirement home that co-stars James Caan, Ann-Margret and Christopher Lloyd. “It’s very charming, and I loved doing it.”

What’s next? “I am in conversations with a director about a very ambitious theatre piece and I hope that will be the next thing I do.”