​Celine Sciamma talks Berlin Competition title ‘Petite Maman’: “I wanted this film in the world as soon as possible” 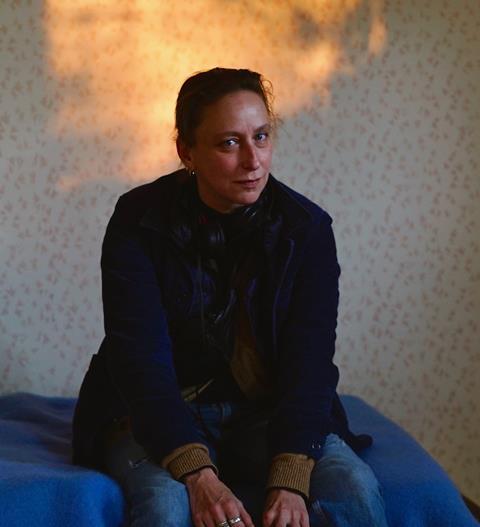 French writer-director Celine Sciamma has been receiving rhapsodic reviews for her new feature, Petite Maman, which premiered in Competition in Berlin this week.

Sciamma’s fifth feature as a director, which is on mk2 Films’ slate and has been picked up by Neon for the US, is an intimately focused story about an eight-year-old girl, Nelly, who has just lost her beloved grandmother. Early in the movie, as she plays in the woods, Nelly meets another girl exactly the same age as her who is called Marion, by eerie coincidence the name of Nelly’s mother.

“I was in the process of writing Portrait Of A Lady On Fire and I was also in the process of promoting [animated feature] My Life As A Courgette [which she scripted],” Sciamma says, recalling when she first had the idea for Petite Maman.

“I had been going through the process of meeting this very young audience. It had been very fulfilling to address kids in that manner. My Life As A Courgette has this depth and this rhythm. It is so unconventional regarding what kids are supposed to love or to want – and what is supposed to be marketed for them.”

Sciamma began to toy with the idea of making a film dealing with childhood. She also decided to take what she describes as “a new approach to the time-travel story”. The conceit here is that the girl meets her own mother – as a child her own age.

There are several personal references in the film but they tend to be oblique. “The shape of the window in the kitchen, the furniture, the wallpaper – there is a lot of memory in the objects,” relays the filmmaker.

The grandmother is directly based on one of her own grandmothers. The exteriors of the film are also shot in Cergy, her hometown.

“That was actually my true childhood playground,” says Sciamma, who aimed the story at adults as well as children. “The film is not childhood-related totally. It is from the perspective of a kid but [it tries] to show how deep that perspective is.”

The director has watched on in dismay at the way children have been treated during the Covid-19 pandemic. They’ve been accused of spreading the virus or sometimes ignored altogether. “They’re going through this crisis and we don’t care about them very much,” Sciamma states firmly. “We are all former kids. That is something we all share, right?”

She pays tribute to her casting director Christel Baras, who she also worked with on her previous features Portrait Of A Lady On Fire (2019), Girlhood (2014), Tomboy (2011) and Water Lilies (2007). However, she won’’t reveal too much about Petite Maman’s precocious young leads – Josephine Sanz, who plays Nelly, and her twin sister Gabrielle, who plays Marion.

The filmmakers advertised for actors on the internet, saying that sisters and twins were welcome to apply. “We met [the Sanz sisters] and I felt they were really interested in the film,” says Sciamma. “Their parents also were touched by the project. They were not cinema people.”

She was keen to cast siblings because she felt that, as a director, she would benefit from “their intimacy and the fact they would feel very easy with each other… Also, the fact that they were siblings, I dreamed of that during the writing of the script. It is totally connected to the idea of the film.”

Sciamma was determined to create as safe and welcoming a space for the sisters to work in as possible. “This has been a very fulfilling collaboration,” she adds. “It’s the power of understanding each other without going through explanations. They can only shoot three hours a day so you have to be prepared and you have to trust each other. They really got the rhythm, the language of the film. They care so much. They’re not going to let you down.”

Petite Maman was shot during the pandemic, at the end of last year, and Sciamma only finished the film right before the start of Berlin.

“It definitely creates a whole different atmosphere with a lot of gravity,” she says of working with stringent Covid protocols. “It changes the spirit on the set but it was a beautiful spirit. People who were committed to the work were very privileged and happy to do it.”

While Sciamma is of course thrilled that critics are responding to Petite Maman, they are only part of the audience she is trying to reach.

“It’s really great to be at a festival but there are no kids at festivals. So that’s the next step, having kids and grown-ups sharing the same cinematic experience. Now we know it works on adults,” she notes of the positive reviews.

As for not being able to walk up the red carpet during a virtual Berlinale, Sciamma says that if she had “wanted very badly to have that kind of emotion”, she would simply have waited for a later festival in 2021 where that might have been possible.

“But I wanted to put the film in the world as soon as possible. And I am also very curious and happy to discover new ways of sharing cinema. It was interesting to go through this festival on my couch. It is very experimental and I am all for experiments!”