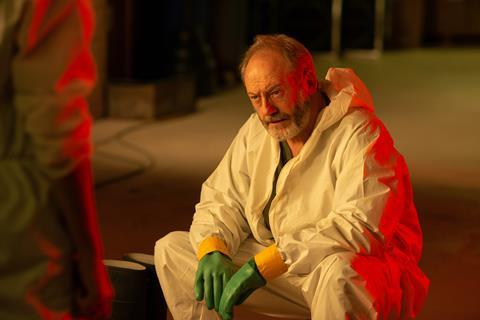 Liam Cunningham’s character in The Hot Zone is officially described as a “reclusive Ebola expert”. But to at least one other character in the limited series about the race to stop a deadly virus invading the US, Cunningham’s Dr Wade Carter is “a pathogen-chasing wack job”.

A composite character with no single real-world counterpart, Carter appears both in the 1970s as a field worker in Africa who is one of the first westerners to see the terrifying effects of the Ebola virus, and in the 1980s as mentor and ally to real-life US military scientist Nancy Jaax (played by series star Julianna Margulies).

To Irish screen stalwart Cunningham — familiar from features such as Hunger and The Wind That Shakes The Barley but arguably best known for his seven-season run playing smuggler-turned-knight Davos Seaworth in Game Of Thrones — the character is “a bit of an Indiana Jones, with a very small ‘i’.

“He was sidelined as an expert because he was passionate,” continues Cunningham of Carter’s story. “He was a hunter chasing this thing down as if it was an escaped rabid animal, as opposed to a man in a white coat staring into test tubes his whole life. I wanted him to represent the audience. As we roll him out you see his heart is very much in the right place and he’s got a real sense of compassion. And the fact the suits and the grown-ups didn’t like his methods shows you how easily the scientific community can sometimes sideline the people who are actually best at their jobs.”

The fact portions of the series are set and were shot in Africa — where health workers in the Democratic Republic of the Congo are currently fighting the second-largest Ebola outbreak in history — gave Cunningham a particularly personal connection to the project. In the 1980s, before he became an actor, Cunningham worked on rural electrification projects in Zimbabwe and, more recently, has visited refugees in Uganda with humanitarian organisation World Vision.

“I didn’t just do the research, I lived the research,” he says of the experience he put to use on screen. “I was treated with so much kindness and generosity by the people of Zimbabwe that the continent is in my heart. Most of the time if I’m offered a job that’s going to be filming in Africa I take it very seriously, because I love going to the place and I love filming there.”

Cunningham, who is now looking forward to returning to life as “a strolling player” after the whirlwind final season of Game Of Thrones, suggests bringing The Hot Zone to a TV audience is one way of addressing the effect Ebola has had on Africa and the threat the virus poses to the rest of the world.

“All credit to Nat Geo for tackling the story and trying to tell it in a gripping and dramatic fashion,” says Cunningham. “It was incredibly important to do so we could get the message across that this is a thing that can kill us all, and we don’t have the luxury of being complacent just because it’s happening to Africans in a place we’ve never seen and don’t feel any connection with. The story shows we’re not safe from this.”