Five talking points ahead of CinemaCon 2017

UPDATED: Expect traditional release windows to be high on agenda. 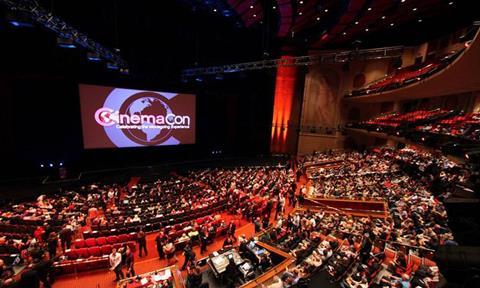 CinemaCon, the annual convention of the National Association of Theatre Owners (NATO), is focused on the relationship between exhibitors and distributors. And like all long-time relationships, it is one that has learned to take the rough with the smooth. The talking points at this month’s event, held March 27-30 in Las Vegas, are likely to test this dynamic more than ever before.

Will there be a breakthrough on release windows?

While there have been experiments with the average 90-day theatrical window before a film moves on to home entertainment platforms, we are unlikely to see a dramatic paradigm shift at CinemaCon. AMC Entertainment CEO Adam Aron recently stirred the pot when he said he was intrigued by the notion of home viewing within several weeks of theatrical release if exhibitors could get a share of digital revenues. He noted, however, that private conversations between his side and the studios had been going on for well over a year and could continue for just as long.

While theatre owners want to protect their cushion, favourable early splits on ticket sales and lucrative mark-ups on concessions, the studios want to reach audiences as quickly as they can, any way they can. Studios and theatre owners cannot sit around a table to thrash this out because of anti-trust laws, yet the position of each of the big six seems quite clear.

Broadly speaking, Warner Bros and Universal are considered to be the most aggressively in favour of diminishing windows, because they are owned by cable companies eager to feed subscribers content. Paramount and AMC experimented with revenue share on Scouts Guide To The Zombie Apocalypse and Paranormal Activity: The Ghost Dimension in 2015, when the films launched on digital platforms 17 days after they dipped below 300 theatres. It is understood the awareness created by theatrical drove three times as much digital revenue as the studio would have ordinarily expected.

Elsewhere, Fox says it is in favour of a 45-day window; Disney, with its stable of billion-dollar brands, is flat-out against shortening windows; and Sony has not taken a position.

“This [issue] has been a bone of contention for years now,” says Michael Goodman, director of Digital Media Strategies - Strategy Analytics. “Getting first dibs on movies has been a critical part of movie theatres’ strategy and they’ve been very concerned that if they don’t have that it would impact their business.”

A less drastic change, such as a 45-day window, would likely come in first, and there is the sense theatre owners realise something has got to give. “A strong ecosystem is critically important to the survival of the movie business and they probably need to make concessions,” says one source close to the studios, who counsels a softly-softly approach. “We have to be careful as we shorten windows that we don’t do something that’s irreversible.” The question remains just how far NATO president John Fithian will go to acknowledge the topic, if at all, in his industry keynote on March 28.

Where is Screening Room?

A year ago, news of Napster co-founder Sean Parker’s proposal for a day-and-date service leaked to the press on the eve of CinemaCon 2016. The entrepreneur’s plan for a $150 set-top box and $50 transaction fee for each new release had everybody doing the math. His declaration that studios and theatres would get a cut of revenues sounded great in theory, but the issue fizzled out — publicly, at least.

While Screening Room has maintained a steadfast refusal to talk to the press, it is understood Parker and co-founder Prem Akkaraju continue to operate behind the scenes and have reached out not just to the studios but global content creators and exhibitors.

Yet some remain sceptical. “Adding a third party to this seems entirely unnecessary to me,” one senior studio executive says, acknowledging that the US majors and many distributors have the pipes and the relationships to do day-and-date without a helping hand.

Will Netflix and Amazon Studios destroy the theatrical experience?

Besides the fact that the digital giants have the wherewithal to buy any studio or exhibition chain tomorrow (subject to regulatory approval), Netflix and, to a lesser extent, Amazon Studios rely on subscriber models and the sense is theatrical will endure - so long as distributors continue to make good content that people want to see in theatres.

Furthermore, Amazon Studios wants to play in the sandbox. It has made serious noises about its theatrical distribution model and there is word it might be looking to set up its own distribution arm as the company’s executive prepare to return for a second CinemaCon presentation. With Manchester By The Sea, it got behind a successful US release (partnering with Roadside Attractions), and backed a triumphant Oscar campaign.

“Even though they’re moving into film, film is not their key distribution channel,” says Goodman of the digital players. “It’s the equivalent of direct-to-video. They’re making film whose price structure they can monetise within their existing model.”

ComScore senior media analyst Paul Dergarabedian believes the presence of the digital titans has become “complementary and additive, rather than competitive” in today’s marketplace. “A couple of years ago, the thought of a Netflix, Amazon or Hulu being a competitor to the theatrical space would have been unthinkable and it’s caused exhibitors to circle the wagons. But we are seeing that audiences who love to watch content on the small screen also love to watch content on the big screen.”

Dergarabedian suggests it is incumbent on exhibitors to make patrons feel special and differentiate from the home-viewing experience. “The moviegoing experience is second to none and, while there can be alternatives, there’s no substitute for the big-screen experience. There’s nothing to fear as long as the studio content is good and the exhibitors continue to up their game and create the best possible in-theatre experience.”

“I don’t think movie theatres are going to go away but, like everything, the business continues to evolve and the players have to evolve,” says Goodman. “Those that do so will be successful. Those who do not will fall by the wayside.”

Alternative programming, comfortable seats that may or may not vibrate, gourmet menus and drinks for grown-ups — a panel on the ROI on alcohol sales is set for March 29 — are some of the approaches exhibitors have adopted to increase the allure of their auditoriums. In March, Cinepolis USA was on track to open the country’s first children’s theatres in two of its southern California sites, enabling youngsters to enjoy play structures prior to (not during) a family film. Exhibitors are doing what they can.

How do the studios feel about the 2017 box office?

In a word: bullish. It’s easy to see why, when the year’s releases include established hits like Beauty And The Beast and Logan, while Kong: Skull Island has not set the box office alight but is closing on $300m worldwide. Anticipated tentpoles include Furious 8, Guardians Of The Galaxy: Vol 2, The Mummy, Cars 3, Transformers: The Last Knight, Despicable Me 3, Spider-Man: Homecoming, Dunkirk, Pirates Of The Caribbean: Dead Men Tell No Tales, Thor: Ragnarok, Star Wars: The Last Jedi , and so on.

Each of the six US majors, along with Lionsgate (La La Land) and STX (Bad Moms), will use slate presentations to thump the tubs in CinemaCon’s usually entertaining star-studded rituals. Amazon Studios returns with a presentation, too.

How does Paramount feel about the 2017 box office?

News that former Fox Filmed Entertainment chief Jim Gianopulos might be poised to fill the seat left by Brad Grey will sound like music to theatre-owners’ ears in the run-up to the show. Gianopulos is vastly experienced, friendly with exhibitors and talent, and would be the steady hand the embattled studio needs.

This year’s crop of Paramount releases looks promising on paper: Ghost In The Shell is imminent, while Transformers: The Last Knight (pictured) and Baywatch open in the summer, followed by Daddy’s Home 2 and Alexander Payne’s Downsizing. Darren Aronofsky’s mother! is the wild card.