From legendary lunches to unbelievable deals: 60 years of the Cannes market 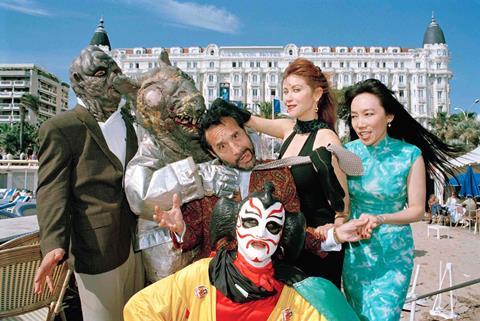 Flash back to May 1968. Amid political turmoil, student protests and agitation from filmmakers Jean-Luc Godard and Francois Truffaut among others, the 21st Cannes Film Festival was abandoned. This is a famous part of Cannes history. What is not so well remembered is that the Cannes Marché carried on in spite of the unrest.

UK market veteran Michael Ryan, now a partner in GFM Films and chairperson of IFTA, was there in 1968 as a teenager in one of his first jobs, working for David Stirling, founder of the SAS but also a media entrepreneur. The Marché then was held in the old Palais, now the Marriott hotel.

“People carried on doing business. I certainly stayed there for a few more days,” Ryan recalls of that turbulent year. “But the spectacle of people wandering in their tuxedos was no more because [the students] were literally throwing paint bombs.”

The market may be celebrating its 60th anniversary this year but business had been done in Cannes long before the formal market was established in 1960. From 1946 onwards, informal screenings were held at cinemas on Rue d’Antibes where international producers would license the rights for their films.

In the early years, the festival had been wary about incorporating an official market. The organisers did not want the buying and selling of films to steal attention away from an event dedicated to the art and culture of cinema. However, André Malraux, minister of culture during the Charles de Gaulle presidency, and Robert Favre Le Bret, founder of the festival, decided to make the market a (small) part of the festival.

The inaugural market was tiny — a few dozen industry delegates and a single screening room on the roof of the old Palais. Since then, though, the market has grown and grown. “114 countries, 12,000 participants, 4,000 films and projects,” trumpets the Marché’s website of the expected size of this year’s event.

“The Marché is huge and very effective. Otherwise, people wouldn’t come and do it every year. It is brilliantly run,” says legendary PR executive Dennis Davidson, co-founder of DDA.

Producer and former Screen International editor Colin Vaines first attended Cannes in 1978 whenScreen, under its then publisher Peter King, started to publish market dailies. The video era was beginning in earnest. This meant the market was no longer reliant on screening rooms and projection booths. Cannon, under its flamboyant bosses Menahem Golan and Yoram Globus, was buying “colossal” amounts of ads. Mario Kassar and Andy Vajna’s Carolco Pictures was in its pomp. Kassar called Cannes the company’s “greatest playground” as he flew in the Gipsy Kings to play at one party and introduced Sharon Stone to the world’s media when the company launched Total Recall.

By then, Ryan was working for media mogul Lew Grade at ITC. The video boom had ushered in an era of conspicuous consumption, mega parties and huge publicity stunts. Grade would throw his famous Hotel du Cap lunches at which hundreds of distributors and producers would be present. It was at one of these lunches that he talked to his guests about his ill-fated epic Raise The Titanic, quipping it would have been cheaper to lower the Atlantic.

This was a time when sales agents could stick up a poster in their booth and pre-sell a film at Cannes one year and deliver it the next. “If you were a producer with credibility, agents were much more amenable to providing you with talent than they are today,” Ryan remembers of a period when indies had easy access to bankable cast names — and did not have to compete for them with Netflix or Amazon.

Ryan remembers selling a sequel to The Long Good Friday, announced by HandMade Films in the early 2000s, with bit parts for Bob Hoskins and Helen Mirren. “We put the artwork on the wall and we raised $37m in eight days,” he says of a film that was never made.

The Marché has always lent itself to stunts and marketing opportunities. Sometimes, they have verged on the ridiculous. Stars would be flown in to Cannes to promote market premieres or to announce films that never got off the ground. UK-based publicist Jonathan Rutter has vivid memories of Brigitte Nielsen in Cannes to tell the world about her new superhero film, She-Hulk. “I wished I’d saved some of those colour transparencies where they had got her into a studio and put her in costume and make-up. She did a photocall on the Majestic pier and the pier broke.”

Others remember the giant inflatable model of Arnold Schwarzenegger that slowly shrivelled away after somebody shot it with an air rifle. There is talk of the fly-past with dozens of planes organised by maverick showman and producer Alexander Salkind to promote Superman. According to Ryan, a US distributor punched the president of Japanese powerhouse Shochiku in the ribs as the 50 or more planes came by with their Superman banners, telling him, ‘It’s just like fucking Pearl Harbor.’ So that deal didn’t happen.”

When Stephen Woolley first attended the Cannes market in the early 1980s to acquire video rights for UK distributor Palace Pictures, which he had co-founded with Nik Powell in 1981, few of the sales agents even knew how to price video.

“It literally was an unknown world,” he says. “When I bought the entire catalogue of [Rainer Werner] Fassbinder movies, the person I was dealing with had no idea what video was. She had no concept of how much money she should charge me or of how much money we would make. I also had no idea.”

Woolley, who acquired titles ranging from Evil Dead to Fitzcarraldo, never distinguished between titles in official selection and those screening in the Marché. “There were no boundaries. There were just lots of films. I had no snobbish notion of the good films being shown in one place and the bad films in another.”

He points out the majority of films that show in the festival are French, the selection is limited and there are always discoveries to be made in the backstreet cinemas of Cannes. “Many, many great films, whether it’s Sam Raimi with Evil Dead or Pedro Almodovar with Women On The Verge Of A Nervous Breakdown, don’t necessarily get selected — a lot of times, those films are showing in the marketplace.”

It was in the market that Woolley first saw Neil Jordan’s Angel in 1982, “late night in the Star [on the Rue d’Antibes], where it was very hot and the air conditioning wasn’t very good.” He “fell in love” with the film. This set in motion a series of events that pulled the UK’s newly formed broadcaster Channel 4 further into the international film business. Woolley tried to acquire the rights from the producer, John Boorman, who warned him it could not be shown in UK cinemas: Channel 4 had backed the film on the understanding it would be broadcast first in the UK, even if it were available for theatrical release elsewhere. Woolley was able to negotiate a three-month theatrical/video window for Angel in the UK (at the time, exhibitors generally insisted on a three-year theatrical window).

German sales outfit Beta Cinema gave a major push in the Marché to Florian Henckel von Donnersmarck’s The Lives Of Others in 2005, which had been rejected by both the Berlin and Cannes competitions. Beta CEO Dirk Schürhoff remembers the film was already a hit in German cinemas. Beta translated local reviews and sent them to distributors. The first market screening was so crowded that 60 or 70 buyers were left stranded outside.

“I went to the projectionist, asking him on my knees to repeat the film after the first screening,” Schürhoff recalls. It was late at night but the projectionist agreed. On the back of the Marché screenings, The Lives Of Others ended up being sold to Sony Pictures Classics and less than a year later won the foreign language Oscar.

The way business is done at the Marché changed completely with the arrival of mobile phones and digital communication at the end of the 1990s. The tradition of long lunches (mostly) vanished. Sellers moved out of hotels into apartments or booths in the Lérins, the basement of the new Palais. By consensus, there is a newfound discipline and austerity in Cannes. Meetings are held at half-hour intervals. The change has not pleased everyone.

“Troma Team and I have been going to Cannes for 47 years. We’ll never go again,” says Troma boss Lloyd Kaufman, whose street parades on the Croisette to promote titles such as The Toxic Avenger and Class Of Nuke ’Em High assumed near legendary status. Kaufman bemoans the way Cannes has “gotten more elitist, more fascist,” citing incidents in which police ripped off masks from Troma performers. He also lamented the decision to invite Lars von Trier back to the festival in 2018 after a seven-year ban for making a Nazi remark during an event in 2011.

Inevitably, nostalgia creeps in when attendees remember the deal-making and lavish parties of years gone by. Most agree, though, the Marché has not changed too much in essence. They also pay tribute to Jérome Paillard, who has been at the helm of the event since 1995. As Ryan puts it: “The Marché is a brand he developed almost on his own. He took it and ran with it and I think he is really the king of the markets. He has kept the glamour and has always tied [the market] to the festival. There’s nothing like it.”