Locarno is more than an annual event in the industry calendar — it is expanding its activities to offer professionals, creatives and filmmakers year-round assistance and leadership. 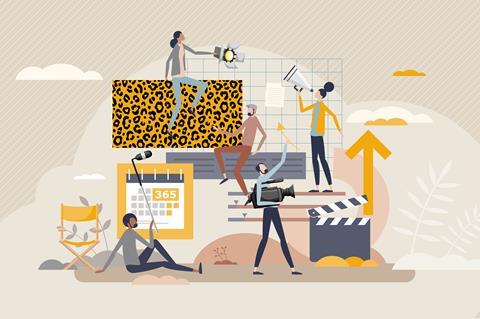 Locarno Film Festival, complete with its Leopard awards and famous Piazza Grande open-air screenings, is an August mainstay on the international festival circuit. But things are evolving. The festival sits at the centre of a year-round connected community that comprises the international film industry, festivalgoers and wannabe filmmakers alike.

“In our vision,” explains Locarno deputy COO and chief innovation officer Simona Gamba, “the 11-day physical festival will continue to be at the core of our model, but our platform will connect people and promote film both from an artistic and a professional standpoint — not only during the festival in Locarno, but also throughout the year in other areas of the world.”

As the industry emerges from the Covid-19 pandemic, Locarno’s 75th edition will see audiences and professionals return en masse — and will also continue with the many online, industry-facing activities of Locarno Pro that flourished during the enforced lockdowns.

Locarno Pro plays an active, 360-degree role in the support of auteur cinema. Its goal is to aid sales agents, distributors, exhibitors, producers and filmmakers from conception to release of independent arthouse films in different areas of the world — whether they are launching a new project or extending and optimising their existing services and initiatives.

Resources are available to film professionals who are working to realise and distribute films, and those looking for rights holders or distributors. Examples are the year‑round Open Doors initiatives — the Open Doors Toolbox, an advice hotline and dedicated consultancy service. All three were launched in 2019 and are run by Zsuzsi Bankuti, who is tasked this year with leading Open Doors.

Locarno Pro also runs the digital platform Heritage Online, which looks to extend the outreach and distribution of heritage films through video on demand, increasing the range of heritage and library titles offered by such services.

“Both the ToolBox and Heri­tage Online are virtuous examples of how the Locarno Film Festival is evolving through enriching the different kinds of interactions that already take place physically during the festival,” explains Gamba. “Open Doors ToolBox provides a resource centre for directors and producers to acquire knowledge, and project development possibilities via international funds and development workshops, as well as to foster a broader alumni community of fellow filmmakers.”

Locarno is not just trying to grow its relational and reputational capital by adding year-round initiatives to supplement its annual tentpole event. “More importantly, we want to empower the professional and young-talent communities,” Gamba says.

The digital and physical events in August and throughout the year are not just aimed at industry professionals — they also cater to emerging young filmmakers and creatives, from artists and students to school children.

The festival has devised a programme of year-round pilot projects — some of which are at the exploratory stage, some at the fundraising stage while others are already well-established. All of the 19 pilot projects aim to foster discussion and explore the future of cinema and cinematography, taking in everything from technologies and audiovisual sciences to audiences of the future.

One of these, established in 2021, is a professorship for the future of cinema and audiovisual arts in collaboration with Universita della Svizzera Italiana (USI), alongside festival partner Swisscom. Kevin B Lee — the professorship’s first incumbent — is investigating the structures and dynamics underpinning the evolution of the industry, media consumption trends and behaviours. His research will help Locarno lay the foundation of the festival’s future business model.

Gamba says Locarno is also developing fresh thematic film funds. After the Films After Tomorrow competitive section was introduced for Locarno’s 2020 edition, turning the festival into a financial backer of film projects, the Locarno Green Project has now been launched. The festival will offer a new prize, the Green Pardo WWF, in collaboration with the World Wildlife Fund, to a film in competition that best reflects an ecological issue. Meanwhile, a Green Film Fund, which supports films that tackle environmental issues, is slated for launch in 2023. Every year, the fund will select film projects for backing that combine artistic quality with a director’s vision to foster environmental awareness and impact society.

“With the festival’s funding model based on public contributions [44%], private contributions [30%] and its own income [26%], Locarno counts on the growing support of private partners for fresh activations, projects and initiatives,” says Gamba. “Our strategy sparks from listening to our needs and those of our community, partners included. Locarno 365 is not a project, it’s more of a mindset.”

Locarno Film Festival organisers are boosting support for young filmmakers who are working towards making their feature‑length directorial debuts. Billed as a tutorial pathway, the Locarno Residency will provide assistance and a first‑feature development support screenwriting programme, with both online sessions and in‑person group workshops at the festival.

The residency is open to submissions from filmmakers under the age of 40, of any nationality, looking to make a film of more than 60 minutes in length: either their first fiction feature, first full-length documentary, or first foray into co‑direction.

The residency follows the ninth edition of Locarno Film Festival’s springtime event L’Immagine e la Parola, which this year centred on the future prospects for moving images, and signals Locarno’s ongoing investment in young filmmaking talents. Locarno Residency project manager Daniela Persico hopes the initiative will prove to be a “vitally important step in the career of every filmmaker”.

The residency has been made possible by the support of Swiss Life which, as an existing partner of the festival’s short-films section Pardi di domani, is keen to help develop the careers of young talents making the jump from the short to full-length format. “This new programme will foster the growth of participants through practical, hands-on assistance with their films,” says Persico.

Phase one of the residency project, open to a shortlist of 12 participants selected on the basis of their submitted project and their career profile to date, kicks off during this year’s festival. From August 4-7, participants will be called to discuss the concepts for their respective films before a jury of industry professionals. The jury will then select three projects to continue on the Locarno Residency pathway, and the three finalists will join a tutorial programme featuring multiple sessions, both online and in-person, over 12 months.

A first mentoring session on developing treatments for the three chosen films is scheduled from December 5-18, 2022 in Venice at the Swiss Consulate’s Palazzo Trevisan degli Ulivi, in collaboration with the consulate general of Switzerland in Milan.

A second session, lasting for the whole of March 2023, will be held near Locarno at the Eranos Foundation in Ascona-Moscia, where the screenplays will be worked on with the residency tutors and with input from the artistic team of Locarno Film Festival.

During the final phase, the projects will be presented in the context of the activities of Locarno Pro during the 76th festival in 2023, allowing the young directors to network with leading players in the film industry. The residency will culminate in an awards ceremony, with prizes aimed at contributing towards the completion of the winning feature-length projects.