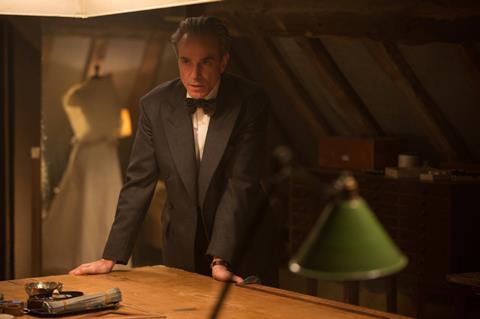 This is your first time working with Paul Thomas Anderson. How did you get involved in Phantom Thread?

Paul was scouting for Phantom Thread around the UK and came to Edinburgh to look for some Georgian houses as potential headquarters for [protagonist fashion designer Reynolds Woodcock, played by Daniel Day-Lewis]. I was working on Trainspotting 2 with Danny [Boyle] and Paul said that he would like to meet me, so we went for a whisky!

Paul had been working on it with Daniel for a couple of years, and they were trying to find where to place it. They had originally thought it might be set in Paris. Then Daniel started to reveal his interest in the British fashion scene and they realised there was a wealth of untold stories to be found. By the time they got to me in Edinburgh, they knew more than I did about the fashion industry.

Did Paul have a strong idea for the look of the film?

He had very strong ideas, but it was a collaborative process. Daniel, Paul and I went on a journey around the country to look at various places where Woodcock could have been from. We went to Kelmscott Manor in Gloucestershire, the house of William Morris, and it was absolutely fabulous. It was the place that William Morris retreated to work, and it matched Daniels’s idea of what would become Woodcock’s country residence [eventually filmed at Owlpen Manor, in the Cotswolds].

The two houses are very separate. The house in London is very much a stripped-back design studio and workplace, and the country house was attached to his past, his family, his mother, his fond memories. It is intriguing, but not too elaborate.

Everything was a discussion. When we decided on a wallpaper in a room, for example, we’d talk through it and sometimes we’d put them up, dress the room and get a feel. In the dining room in the London house, we tried eight different finishes and we ended up with a William Morris design, called ‘pomegranate’. It’s quite jarring and has a slightly metallic feel to it. I would say it’s on the edge of annoying, and that’s the intention behind it.

Daniel Day-Lewis famously becomes very immersed in his roles. Was he involved in the design process?

In my experience, performers are becoming more involved in the design discussion, may even purchase a couple of things themselves to go into the sets, but I can’t even express the detail that Daniel goes into.

After a time you don’t speak to him as Daniel, you speak to him as Woodcock; he comes into the office wearing his costume, he’s talking with a slightly different accent, and he’s engaging with the mind of Woodcock in the choices of his shaving brush, or his pen. That pen was old, from a second hand shop, and started to leak. Everyone was concerned, but Daniel said, “No, this is the pen and, if the pen leaks, I’ll have a stain in my jacket – and that’s great!”

How did you ensure these layers of design detail never detracted from the characters or their story?

Phantom Thread is quite an old fashioned kind of film in a way; there’s a terrific simplicity in the movement. All round we tried to strip things back and keep things elegant, and make it about the people. They are driven not by the setting, but by the objects around them. It’s like a radio play; when you don’t have to watch anything, your imagination is able to fill in the missing parts. It’s the same when a film has breathing space; it’s elegant and uncomplicated and allows the audience time to think.