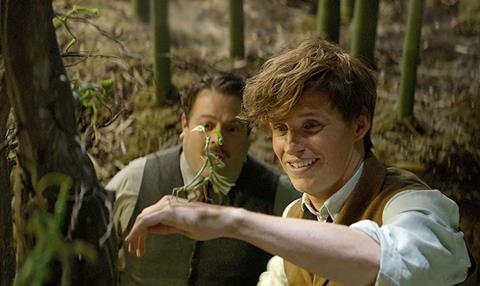 Set in 1926, Fantastic Beasts And Where To Find Them introduces magizoologist Newt Scamander (played by Eddie Redmayne) as he embarks on an expedition to New York City, carrying endangered magical creatures inside a special suitcase.

“One of the lovely things about the world of Potter was that even though it was magical, it felt grounded in realism,” says Tim Burke who, along with Christian Manz, was VFX supervisor on the new film.

“That was always our goal with Beasts. We wanted to create an environment that would allow the audience to feel they hadn’t seen anything like these creatures before, yet not so fantastical that they couldn’t exist in the wild.”

Taking a cue from vintage Harold Lloyd film Speedy, which depicts the hustle and bustle of New York in 1928, Stuart Craig’s production design grounded the tale “in a city in chaos, where everybody is busy building a new life,” says Burke.

CG background plates of New York were blended with studio work at Warner Bros Studios Leavesden and footage shot on location in Birmingham and Liverpool in the UK.

Burke and Manz, who both worked on the Potter films along with Fantastic Beasts director David Yates, divided the film’s set-piece sequences between them, with Framestore anchoring the work of nine separate facilities.

While a number of creatures featured in Rowling’s original book, which was published in 2001 midway through the Potter series, the $180m production had scope to imagine a larger menagerie.

“David was clear that each creature should be included for a reason, rather than just forming part of the background,” explains Manz.

“This meant giving each one a character, as well as a look. As we went from 3D model to animation [led by animated supervisor Pablo Grillo] and back again, we were able to develop stories for them that fitted the purpose of the script. Since we were also briefed to design a lot of the action sequences, this meant the look, the characters and the story were evolving at the same time.”

For example, the Niffler - a small, duck-billed rodent that robs a bank in the opening scene - had appeared in Rowling’s book Harry Potter And The Goblet Of Fire, published the year before Fantastic Beasts. Inspiration for its animation came from video of a honey badger raiding a refrigerator for food.

Elsewhere, for the Erumpent, which is also mentioned in the Potter books, conceptual artist Rob Bliss drew on rhinos, hippos and bison for inspiration. Again the aim was not to make the creature too fancy - despite a liquid sac crackling with electrical current on the creature’s forehead.

“We wanted to give her a slight feminine quality without being too cartoony,” says Burke of the character.

“We found footage of a man in the midwest of America who kept bison and had invited one into his house. It was amazing how this large beast suddenly moved cautiously, daintily in the living room.”

“The idea was to show as wide a variety of creatures as possible in their natural habitat,” explains Manz.

“We planned to have Newt walk through a safari that we would shoot on location. When JK Rowling saw our presentation, she suggested it would take a wizard more powerful than Voldemort to have created it, and Newt is not a great wizard. So, we had to pare our ideas back and came up with more of a ‘Heath Robinson’ approach in which Newt had patched each creature’s pen together.”

The design touchstones were museums and zoo dioramas.

“We wanted distinct spaces where the creatures might feel at home and could roam, centred around Newt’s zookeeper shed,” says Manz.

“The first reveal of the world inside the suitcase was to be of his shed, and then we take the audience outside to reveal even more.”

Designed as a single 10-minute shot to achieve an experiential or dreamlike state, the sequence worked more coherently when cut, although sections of the longer shot remain.

After working out which elements would be digital and which needed building physically, the VFX team blocked out the camera moves on a soundstage.

“The pre-viz was pretty close to the final timing and set-up of the shot,” says Manz.

Acting opposite computer-generated beings tends to involve simple devices such as a tennis ball on a stick to help actors establish an eyeline. Since Newt’s relationship with his beast friends was so important to Redmayne, puppets were used in pre-production.

These ranged from simple maquettes of the stick-insect-like Bowtruckle, to glove puppets of the Niffler and a full-scale version of the Erumpent built as a 17ft-wide, 20ft-high carbon-fibre frame and operated by the puppeteers behind stage play War Horse.

Newt’s mating dance with the Erumpent was worked out between Redmayne, a choreographer and the four puppeteers who took their cues from animation studies.

Splitting VFX-heavy projects between post houses is not unusual and was a necessity for Beasts because of the many different types of work required, including the design of the Magical Congress of the United States of America (MACUSA), along with 17 different creatures and set extensions.

The suitcase sequence alone married the work of five facilities.

“When we started the Potter films, it was believed that only facilities on the US west coast could handle this level of complex work but, over a decade of Potter, confidence in UK companies has grown and grown,” says Burke.

Indeed, the first Potter film in 2000 contained less than 15% of UK-produced VFX. By the time of the final film in 2010, more than 85% of the visual effects were done in Britain.

“It got to the point where you didn’t want to give all your work to one big US company because you’d be tied to their schedule and there was no guarantee they would put their best people on all aspects of it,” Burke says.

“What we can now do is cherry-pick the best talent from around the world to do specialist shots rather than overloading one facility.”

“By plugging into different cultures you get different ways of working. You get a European sensibility.”

“It’s making sure the moving parts fitted together, which for the suitcase didn’t happen until the final week of post because there were so many elements. David [Yates] had to have a lot of faith in us.”

The most difficult concept to pin down was that of the malevolently evil force Obscurus, described in the script as simply ‘repressed magic’.

“For pre-viz sequences we used various particle or fluid effects or sometimes just shapes that helped us develop the storyline. But it didn’t tell us what it was,” explains Burke.

Actor Ezra Miller, who played troubled witchfinder Credence, prepared for his role by developing a “contorted physical performance of anger and rage with this incredible guttural noise”, says Burke.

“We played around with a video of it on Avid, retiming, reversing it and tried to create a broken rhythm. David liked what he saw.”

Even then, D-Neg had quite a task to translate the actor’s performance into animation.

The facility wrote bespoke tools for the Obscurus, since it needed to move differently whether in Times Square, the subway or in the air.

“Hopefully we managed to convey emotion through an animation that didn’t have any face or character at all,” says Burke.