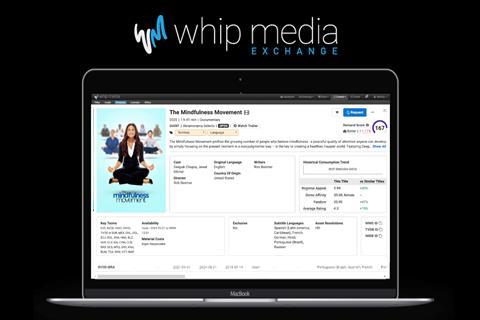 Whip Media, a leading international enterprise software platform and aggregator of entertainment-related data, will have a strong presence at the AFM 2021 Online.

Media veteran and former Fox executive Sherry Brennan, in her role as executive vice president and general manager of Whip Media Exchange, says the film and television content marketplace is ripe for a data-led boost.

“The Exchange serves as a central hub for discovering, buying and selling content rights, enriched with ‘demand scores’ and other key predictive insights,” says Brennan. The demand score is an index between one and 200 that predicts how a title will perform on a given platform in a specific territory and availability window - essentially the industry’s first recommendation engine for buyers and sellers.

Currently operating in beta, the Whip Media Exchange comes to market amid the exponential increase in global viewing that has created a huge demand for content.

The firm is hosting a virtual AFM panel discussion entitled A New Day for Content Licensing: Make Better Deals with Predictive Insights, which will take place on November 4. Whip Media is also hosting a virtual meeting table on the 9th floor of the Networking Pavilion and offering daily demos of the Exchange.

Buyers and sellers largely rely on traditional data sets, personal relationships and gut instinct to license film and TV. The Whip Media Exchange aims to supercharge the traditional licensing strategy with a way to predict title performance, put the right partners together and improve return on investment.

“We aren’t trying to replace creativity, originality, whimsy, or personal relationships. We understand all of that is integral and vital to the process,” says Brennan, prior to the AFM. “What we do is bring an extra layer of insight, science, a way of normalising how you compare titles. One metric. We’re not saying this is the only thing that matters, we’re saying this is a thing that can help you.”

Each series and film on the platform is analysed and given a demand score based on consumer viewership and engagement insights collected from 19 million viewers in more than 170 countries on more than 1,100 platforms.

“We offer a unique combination of workflow efficiency and predictive insights and frankly the wiser choice of helping to facilitate real relationships, as opposed to trying to replace them,” says Brennan. “We think a system like ours that makes it more efficient and easier to find content and easier to respond to enquiries and to keep track of who you haven’t responded to has a lot of value.”

Crucially for buyers and sellers the software as a service (or SaaS) product (instead of having to install and maintain software, the product is accessed via the internet, liberating users from complex software and hardware management systems), will not seek a cut in any deals struck when it exits beta.

“We do not intend to take a piece of the deal,” Brennan says. “We don’t intend for price to be a barrier to anybody looking to use it and we also do not intend to have our hand in any dealmaker’s pocket.”

With more than 300 production and sales companies and international trade organisations from more than 25 countries registered as exhibitors for the AFM, which runs November 1-5, the Whip Media Exchange is well placed to entice dealmakers.

“Any genre, any language, any dub version, subtitles and language specific versions can be listed and deals can be struck within the Exchange system or separately”, says Brennan, who adds: “It’s incumbent on us to make the tools to keep people coming back. As opposed to having a stick, we’re trying to have a carrot.”

Whip Media is a premiere sponsor of the AFM 2021 Online.