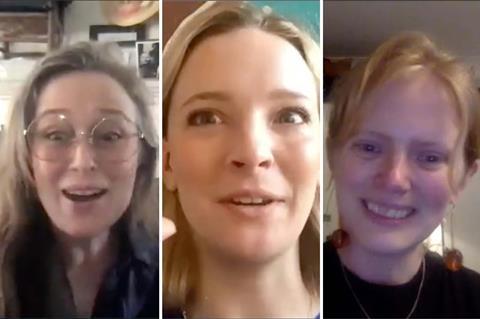 Rose Glass describes the success of her debut feature Saint Maud as “mind-boggling and weird to process”. While the film was in post-production, the 31-year-old writer/director recalls, she told one of her flatmates that she was so enjoying making it she wouldn’t mind if it turned out that people hated it. They didn’t.

Despite being released into an unprecedentedly difficult environment, this independent UK psychological horror film has grossed $1.2m (£850,000) at UK cinemas alone, garnered widespread critical praise, and earned numerous accolades, with wins at the British Independent Film Awards bolstered by Bafta nods for outstanding British film and outstanding debut (announced after this interview was conducted), as well as a rising star nomination for its lead actress Morfydd Clark.

To help Glass process this success, Screen International reunited her on Zoom with the film’s stars Clark (calling from New Zealand, where she is shooting Amazon’s The Lord Of The Rings series) and Jennifer Ehle (from her home in the US), who respectively play the traumatised, God-fearing nurse of the title and her acerbic, lymphoma-stricken patient Amanda Kohl.

Together they look back on the joys and emotional challenges of creating this dark character piece — shot over five weeks in winter 2018, in London’s Highgate and Scarborough, North Yorkshire — and consider the unexpected relevance it gained as Covid-19 ravaged the globe.

Please note, this conversation contains spoilers for the film.

Screen: Rose, from your perspective as a first-time feature writer/director, what was it like seeing your characters take the form that Morfydd and Jennifer gave them?

Rose Glass: It was a real treat. I was so terrified going into it, of messing up and specifically of working with actors. Obviously, actors know a lot more about acting than you do, and you get afraid of not having the right answers. But working with these guys was just a really easy, enjoy­able experience, and both characters developed hugely through their performances.

Screen: Jennifer and Morfydd, did digging into these characters prove a big research job?

Jennifer Ehle: I don’t think I did any research. I watched some Pina Bausch [who partly inspired Kohl, a former dancer and choreographer] and some movies. But nothing specifically.

Morfydd Clark: I’ve quite a few family members who are in the health service and with all of them, when talking about when stuff got tough, the word “guilt” came up again and again. This made so much sense for Maud in terms of her need to cleanse, and the comfort of religion, and also her feeling that she should be punished.

Glass: Obviously, I had done some research when writing it, but only as much as needed to try and make Maud’s rituals with Amanda seem convincing. Luckily, there was a wonderful woman working in the art department, also called Rose, who had worked as a palliative carer. She was kind of an art department assistant-slash-medical adviser.

Clark: Yeah, I spoke to her a lot when we were on set. It was really great to have her there. 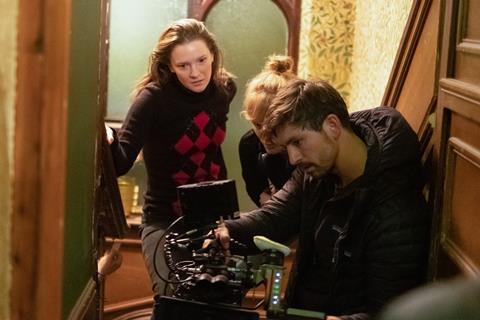 Source: Angus Young / Courtesy of A24

Screen: How did the three of you construct this intensely intimate and difficult relationship between Maudand Amanda? Was there a lot of rehearsal or did you find the moments on the day?

Glass: Mostly on the day, to be honest. I think all of us quite enjoyed that. Though Morfydd and I had a few days’ rehearsal together, because we didn’t have Jennifer in the country by that point…

Clark: …where you played all the other roles in the film…

Glass: Yeah, you got to witness that. But it’s two characters getting to know each other, anyway. We shot it sort of chronologically. It made sense. It keeps things fresh.

Screen: Congratulations Morfydd on your Bafta Rising Star nomination. Maybe it’s an unfair question to ask while you’re sitting here, but did she feel like a rising star to you, Rose and Jennifer, while you were working with her?

Glass: I couldn’t see what the fuss is all about, to be honest [laughs].

Clark: My first week on set, I was probably the least star-like I’ve ever been. I had fallen down the stairs, bruised my bum, eaten something that made me feel incredibly sick. As soon as we went on set, I was just, like, lying down. But then I came to life in the second week and everyone was like, “Oh thank God. Good. Thought that was just you!” [laughs]

Ehle: I remember when my agent sent me the script — and it was an offer, thank goodness, because I loved it. She said, “The actress playing Maud is a Welsh actress called Morfydd Clark, who is absolutely extraordinary. I’m incredibly excited about her.” She also represents Morfydd…

Ehle: Yeah, disclaimer. I was told she was a rising star before I worked with her even, so none of this is a surprise.

Screen: It’s an interesting and encouraging time for British independent film, with films like Saint Maud, Rocks and Promising Young Woman doing so relatively well, in terms of box office and awards attention. Are you feeling that right now?

Glass: Yeah, there have been some great British independent films coming out this year. But I’m sure it’s in part because a lot of the bigger, swankier releases jumped to next year. Our release kept changing, because we were meant to come out just when it went to lockdown. Then we kept being bumped and sort of chasing the James Bond release. When we did have our brief theatrical run, it was a time for smaller films which might have been more overshadowed to get a bit of the limelight.

Ehle: I think it’s the harvest time of people being interested in finding stories that are diverse, and that women are telling. And those are going to be independent films. So I think this is the first season where you’ve had those films coming out while a lot of the tall poppies have not opened. There are some interesting stories and storytellers coming from places that haven’t had light shone on them.

Glass: In that respect, I felt so fortunate throughout the whole process of getting this film made. Maybe it would have been much harder to get a film like this off the ground years ago. But I’ve been met with a lot of enthusiasm and encouragement. When you’re feeling confident and supported, you do better work.

Screen: What for each of you was the trickiest moment while shooting Saint Maud?

Clark: It was probably the rape scene [where Maud’s attempt to end sex with a man she has met in a pub, played by Turlough Convery, is ignored]. Rose had written Maud’s reaction in such a way that you knew this wasn’t the first time. It really made me think about all women, and what’s normalised, and what so many women experience and never necessarily talk about. We had very few people in the room. Obviously, one of them was Turlough, who was just lovely — and the poor thing was getting married at the weekend after doing this horrible scene [laughs]. And Ben Fordesman, the DoP, always made me feel so comfortable and at ease. So even the hardest scenes were made as easy as possible. I sometimes imagine if I was on a set that was really serious and, like, “Let’s be all Method-y,” I would have been very low when I finished Saint Maud.

Glass: Yeah, I think that helped, the fact both of you guys jumped in and out of these quite intense scenes seemingly effortlessly. Generally, when it wasn’t rolling there was a nice, light atmosphere.

Ehle: For me, it was the bathtub scenes. Just because of the feeling of vulnerability. It’s not that I’m playing somebody feeling vulnerable — I’m feeling vulnerable, as a woman as well as an actor. A 50-year-old woman sitting in a bathtub naked and in front of people. And also it was three hours to put the bald cap on, so I felt a lot of responsibility, because I knew it was quite a close shot.

Glass: We were probably like, “Okay, now angle your head a tiny bit this way, and then that way, we need this bit…”

Ehle: Well, I had somebody’s master­piece on my head [laughs], sitting naked in the bathtub. Generally you have a membrane protecting you from actually experiencing what the character is experiencing. But in that situation, I was also experiencing something. 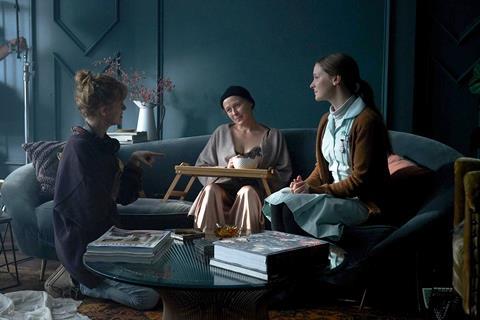 Source: Laura Radford / Courtesy of A24

Rose Glass, Jennifer Ehle and Morfydd Clark on the set of ‘Saint Maud’

Screen: The film has been broadly described and marketed as a horror. Did you feel you were making a horror movie?

Clark: I don’t think I felt like it was. I think this is just how I am with everything, though. I don’t have a grand vision or a sense of the whole. But the moment where Jennifer turns in our final interaction was quite scary. Even without the CGI. That’s the first time I was like, “It’s a frightening film.”

Glass:That was fun, that day. I always thought of the film as a character study more than anything, but obviously when you start saying, “Now bring in the fake blood…” [laughs] The horror-y bits were the most fun stuff. Suddenly you get all the toys, and you get to throw stuff around. Like the bit where Maud stabs Amanda and the blood goes across her face, we were all, like, “Yes!”

Ehle: [laughs] Oh my god, you guys were so high. ’Cause I wasn’t even there. You were on cloud nine when you came back.

Clark: It was such a fortuitous splash of blood, as well. You just couldn’t believe it [laughs].

Glass: Well, I’d missed on all the other takes.

Ehle: I thought of the film more as psychological. It’s more creeping dread and suspense. The real horror doesn’t kick in, obviously, until the very end, with the horror of the missed opportunity, and the delusion, and the absolute sadness of the loneliness. That’s the real horror for me.

Screen: It is interesting that a film that explores profound isolation ended up being released during a time when isolation was forced on so many people. Has Covid-19 made it even more relevant?

Glass: Absolutely. I feel like we’re just sort of piggybacking on it. It’s so unpredictable how it all happened. And it’s more than the isolation thing. It’s also the fact that it’s about a carer who has had a difficult and traumatic time in her past, in her profession. The person who is taking care of someone in the film is really the person who is most in need of being taken care of. If it makes people think about that, then great. But it is a very weird fluke of timing.

Screen: What is next for the three of you? A Saint Maud sequel seems unlikely…

Clark: I’m in New Zealand for the foreseeable future. I’m at the point where I can’t imagine ever coming home, just because this year — and I’ve experienced it better than most — has made me feel like I can’t even imagine a week ahead, let alone a month or more. But I’m having a lovely time.

Ehle: Well, tonight my daughter’s having a virtual sleepover for her 12th birthday, and Sunday nights are pizza night, where I make pizza. That’s about it. That’s kind of where I am right now.

Glass: I’m writing stuff. I’d love to shoot something this year. I’ll try a rom-com next.

Screen: Not so much blood, then.